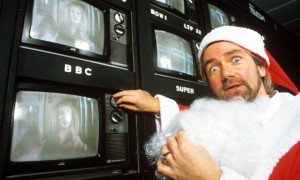 It’s December 1984 and, in the pages of Radio Times, Noel Edmonds is depicted standing before one of London’s most familiar landmarks, grinning into a breezeblock-proportioned mobile phone.

The reason? Nothing less than “one of the greatest communications projects ever put forward,” as Noel modestly described proceedings on the big day itself.

This was the first ever edition of THE LIVE LIVE CHRISTMAS BREAKFAST SHOW, or, as everybody else called it, Noel Up The Post Office Tower On Christmas Morning.

For a glorious period during the 1980s, Noel held Yuletide dominion across the kingdom from atop his celestial citadel in the clouds. This is the story of those good, great times.

Noel was no stranger to the marathon talk-in, of course, having spent six years in the cockpit of the MULTI-COLOURED SWAP SHOP. But instead of chatting on a trimphone with some kid in Kettering about Captain Beaky, or riffing with Cheggers as he bartered Stop Boris on a damp rugby field in Swansea, now he had the entire planet at his fingertips.

Fleets of BBC outside broadcast trucks, miles and miles of fibre-optic links and a multitude of state-of-the-art satellites were deployed, all in the name of bringing us live footage of RULA LENSKA and DENNIS WATERMAN drinking a can of lager in Australia. Leslie Crowther in a paper hat hanging around a hospital ward no longer quite cut it.

For a nation of kids, Noel Up The Tower satisfyingly bridged that barren Christmas morning wasteland between opening all your presents and TOP OF THE POPS, which invariably had been filled previously by some rubbish black-and-white film or – shudder – a circus. Mum could take a break from the Buxted and Bisto to pop in and watch for 10 minutes, while dad could use it to test out that gleaming new Matsui video recorder.

That first extravaganza in 1984 lasted a mere 90 minutes, and reunited Noel with his LATE LATE sparring partner MIKE SMITH, freed from his normal Saturday night duties of standing in the cold outside the National Motorcycle Museum at Beaulieu while some bloke attempted to pilot a Honda Melody through a burning hula-hoop. Now, Smitty got to soar high above the capital in “the BBC-TV hollycopter”, threatening to “drop in on viewers’ homes and celebrations,” but none of this deterred 11 million people from tuning in.

Further attractions including KIM WILDE and HOWARD JONES hassling the patients at Charing Cross Hospital with Like To Get To Know You Well, dedications from Our Boys in the Falklands, and “pictures from Australia, Russia and Italy to see how they celebrate Christmas”, which sounds like the sort of thing Richard Dimbleby might have done in 1956.

In 1985, the broadcast was extended to two hours, and nudged a little later in the schedule (to accommodate ROLAND RAT’S YULETIDE BINGE, fact fans). “Noel will be up at six to travel to London,” revealed a breathless Radio Times. “I’m really looking forward to it,” vouchsafed Edmonds. “If it’s anything like last year, there’ll be a great atmosphere at the top of the tower.”

The pressure was on to top the inaugural festivities, but fortunately Noel had enlisted the formidable combination of GARY DAVIES and THE KRANKIES to mount a live jamboree for children aboard a Virgin Airways jet circling over Gatwick. “For the first time ever,” declared Noel, “we are going to be bringing you live pictures from a commercial airliner, it’s never been done before.” This, of course, being the occasion when FEARGAL SHARKEY made an arse of himself by neglecting to mime along to ‘You Little Thief’.

The programme also featured a live report from a refugee camp in Sudan in order to launch COMIC RELIEF, some blokes cleaning the windows of the Post Office Tower, and manifold Television Firsts for Noel to boast about (“And now an absolute first from the show that loves to bring you firsts”, “We’ll be doing the first ever computer draw”, “We have another first for BBC Television on this special day”).

By 1986, the shebang had been retitled CHRISTMAS MORNING WITH NOEL, for obvious reasons, and Smitty had been relegated to a few filmed inserts “searching for Santa in Lapland”. Even MARGARET THATCHER insisted on gate-crashing the celebrations, contributing a regal Christmas address to a doubtless grateful nation: “We’re very happy to take part in The Noel Edmonds Show.” That’s not its name!

For the first time, the programme was produced in association with Network Ten down under, Another Television First for Noel (“This programme is now being seen simultaneously not just in the United Kingdom but also in Australia, it’s the first time family entertainment has been seen in this way”) enabling him to reunite families and deliver Two-Way Family Favourites greetings around the stratosphere.

Noel also recruited a regional “team of BBC buffoons” across the land, including CLIFF WHITE in Bristol and ANDY SNELGROVE on top of a deserted multi-storey car park in Newcastle, imploring viewers to “come down and join in the fun” from underneath their BBC umbrellas. And, impressively, CLIFF RICHARD in London and ELTON JOHN in Australia – is it just us, or did Reg spend the entire 1980s down under? – performed a live duet. And they said it couldn’t be done on Live Aid!

But the bit from 1986 that everyone remembers was the live charity running race up the Post Office Tower steps, resulting in one MARK KLENATHOUS (“He’s on for £1,500 from Ski yoghurt”) collapsing and needing oxygen at the climax of his attempt.

No doubt Noel had to get up even earlier in 1987, as that year’s broadcast began at nine o’clock, so it could be simulcast in prime time in Australia, New Zealand, Singapore and, er, Gibraltar. Indeed, the programme had to be split into two parts, a bit like when SWAP SHOP had to accommodate THE POPE’S VISIT TO IRELAND, so BBC1 could bugger off at 10.30 for CHRISTMAS READINGS (essentially a posh FIVE TO ELEVEN with Laurence Olivier) and the morning service, before returning to the Post Office Tower for part two at 11.45.

This time round, the regional cast of thousands included JOHN LESLIE in Glasgow and the great HARRY GRATION in Leeds, who should be on telly on Christmas Day every year. There were more fireside epistles from the great and good, including ELTON JOHN, DANNY LA RUE and the leader of the Liberal Party (“Mum, DAVID STEEL’s just wished us all a happy and healthy 1988!”) and the Spot It You’ve Got It Quiz, but nobody at TV Cream really remembers that, because we were playing OutRun on our Spectrum or something.

GORDEN KAYE and JOHN INMAN acted as ringmasters at a Christmas circus in Battersea, but the 1987 edition shall forever be remembered for our first sighting of that bizarre (but Chris Lowe-endorsed) BBC video for ‘I Should Be So Lucky’, with KYLIE MINOGUE looking out of the roof of a car being driven around Melbourne.

The 1988 edition lasted a mere 65 minutes, presumably to enable Noel to race back for lunch in Devon in his customised Winnebago as fast as possible, and frankly it was thin gruel all round, with SHANE RICHIE and SOPHIE ALDRED as the team captains on some quiz, VINCE HILL with some carol singers at 11 Downing Street, and out-takes from Last Of The Summer Wine, presumably of the bathtub on wheels going over a cliff or something.

Mind you, at least we got Noel “swapping” his jumper in the grand Multi-Coloured tradition, a link with the Russian space station, and Christmas messages from RONALD REAGAN and PADDY ASHDOWN.

So, the golden age of Noel Up The Post Office Tower On Christmas Morning had reached its end. For the next 10 years or so, the great man’s Yuletide contribution would consist of NOEL’S CHRISTMAS PRESENTS, an hour of celebrity tin-rattling and tear-filled reunions. But it could never quite replace Noel in a jumper, 625 feet above London, tittering amid the tinsel as a satellite link failed, handing to WAYNE BODKIN in Plymouth, and announcing Another Television First.

Like the man said, “I hope you have an immaculate Christmas Day!”

Yes, in a TV Cream first, we’ve prepared two customised seasonal wallpapers for you to download and save to your computer. Both feature the spirit of 1980s Christmas, Noel Edmonds, in the control room at the top of the Telecom Tower, pointing, gurning and grinning. What better visual representation of Christmas past?

Simply pick the one that matches your computer screen resolution, right-click and download!