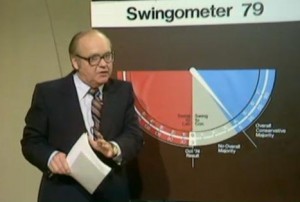 I’m here to remind you to watch BBC Parliament on Friday 9th October for what should prove to be, if I may say so myself, an illuminating glimpse into the future from the perspective of 50 years ago.

Now that may sound a little confusing, so don’t worry, it won’t be, it’s merely a perhaps rather crude way of illustrating how if four out of every one hundred people who are able to watch digital television tune to BBC Parliament at 7.00pm, the channel will end up with its largest share of the national audience since records began, and we really will be on the cusp of a truly momentous achievement.

That’s right, the chance to win more viewers than episode two of season three of Benidorm.

Back to you, Richard. Or David. Oh I’m terribly sorry Robin, do forgive me… [You’re not talking to your students now – Robin].

Related Items:Constituencies written on bits of cereal packet with Letraset, Glam rock-themed bits of cardboard, Personalities going back to their constituencies to prepare for government, The dark arts of politics
Share
Tweet
Share
Share
Email