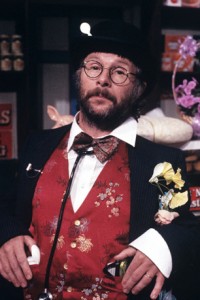 Wondering who’s won our TICKLE ON THE TUM DVD competition? We got Jon Peake (pictured, left), editor of Britain’s best-selling magazine, TV Choice (only 42p) to pick our winners out of his hat. And we’ll reveal who the lucky trio are in a moment.

First, there’s the business of revealing the answer to our competition question. Which was…

– Around the time of what’s become known as the ‘Tickle years’, Ralph also presented a 10-minute musical miscellany for younger viewers, alongside Nerys Hughes. What was it called?

And the answer? ALPHABET ZOO!

Now to the winners, and – we’re not making this up – by sheer chance Jon has plucked three Christophers out of his hat. So, congratulations: Christopher Barbour (who said: “I saw that the Tickle on the Tum DVD was being released and filed it under ‘can’t justify actually paying for the minor Proustian rush I would receive, but if a competition came up I would enter, not that that’s likely, unless TVC…’ and you’ve come up trumps” – interesting filing system, Chris); Christopher Jones (“Kenny the kangaroo-aroo-aroo”); and Chris Browning (“Thanks for this and for one of the most entertaining pages on the internet.”).