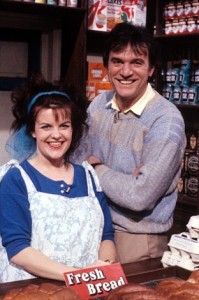 Y’know, we should really set up a regular ‘competition’ section on TVC (we’ve some NEVER THE TWAIN DVDs in the post, apparently) cos yet again Britain’s Brightest Website (in terms of colour scheme, certainly) has something else to giveaway.

Our friends at Revelation Films have furnished us with three copies of the early 1980s, cup-of-tea-with-mum favourite TICKLE ON THE TUM – which is out now on DVD. Set in the titular village of Tickle-On-The-Tum, it features soothing presence Ralph McTell, and features guest appearances from the likes of Kenny Lynch, Bill Oddie, Bill Dainty and Penelope Keith.

Want to win a copy? Then tell us which river the town of Tickle… No, we won’t insult you. Here’s the real question:

– Around the time of what’s become known as the ‘Tickle years’, Ralph also presented a 10-minute musical miscellany for younger viewers, alongside Nerys Hughes. What was it called?

Send your answers to: competition@tvcreamtest.co.uk. The closing date is Wednesday, September 1st. Three names will then be drawn out of a Kenny Lynch-shaped hat, and we’ll drop you a line, asking for your postal address. Good luck!