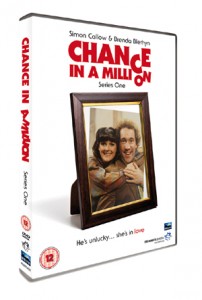 As the drive to release every single TV show ever on DVD reaches its latter days, TV Cream is delighted to announce that, on March 1st, Revelation Films release series one of 1980s Channel 4 sitcom, CHANCE IN A MILLION.

And – what are the odds (less than one in a million, actually)? – we have three free copies to give away to readers who fancy reacquainting themselves with frizzy-haired fracas-inducing oddball Tom Chance (Simon Callow in a rare non-Dickens related role) plus winsome sidekick Alison (Brenda Blethyn).

All you have to do is mail us on competition@tvcreamtest.co.uk with your favourite example of a TV show which has derived its title from its oh-so-conveniently named leading character (a la CHANCE IN A MILLION or FAWLTY TOWERS). Closing date, February 22. The three entrants which tickle us most will then be contacted for their postal details…