Not The Nine O’Clock News meets another BBC comedy show, 1980 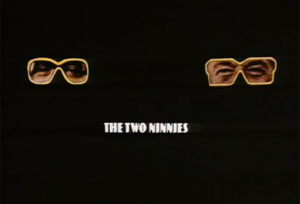 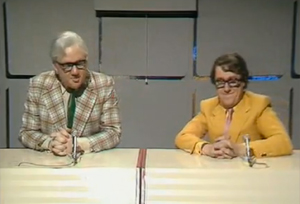 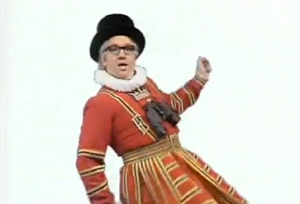 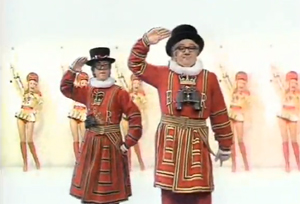 The working title for Not The Nine O’Clock News was Sacred Cows, and it certainly lived up to that name with a sketch that did something highly unusual at the time in criticising one of its BBC stablemates – and the previously untouchable Two Ronnies to boot. Undoubtedly The Two Ronnies is one of the best-loved comedy programmes in the history of the BBC, but even its biggest fans would surely admit that parts of it did get a bit predictable. Hence this sketch, apparently written by a former Ronnies writer, which gleefully sent up the conventions of the series, spoofing its reliance on innuendo and its formulaic jokes, before embarking on a very silly song parody (and we love the way they’re beefeaters for no reason) that builds from subtle double entendres into just a constant stream of blatant obscenities. The acting is also fantastic , especially Mel Smith’s performance as Ronnie Barker, with his constant double takes and smirks to the camera, expertly picking up on Barker’s faux-innocent mannerisms. All good fun and, thanks to the constant repeats, still relevant today, but the huge excitement in 1980 was that this was not only a parody of a BBC programme on the BBC, but a BBC comedy show on another BBC comedy show to boot, and apparently Ronnie Barker was most upset by what he saw as treachery within TV Centre. It’s all fair comment, though, and the fact that they were able to do it on the Beeb is the great thing, illustrating that this was a show that had opinions, that did take the piss out of everything and had no truck with the convention that they were things you didn’t touch. In its own way it was as daring as any remark they made about the government and certainly struck a chord with viewers. Of course, the Rons themselves continued much as before and rightly enjoyed huge succe ss – but it doesn’t mean it’s the only way to do comedy, and The Two Ninnies sums up why Not seemed such a breath of fresh air at the turn of the eighties.