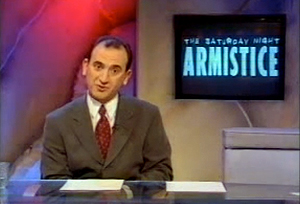 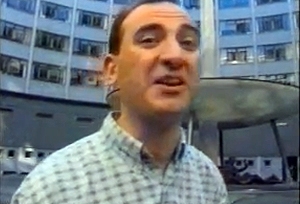 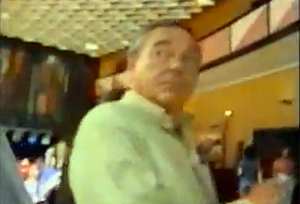 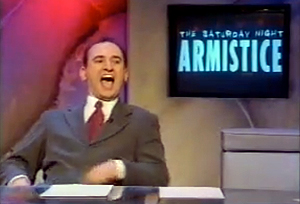 If we could do anyone’s job we think Armando Iannucci’s would be pretty sweet, as the likeable Italian Scot has been responsible for some of the finest comedy of the past two decades as performer, writer, producer, director and executive. We certainly can’t think of many people who have excelled in so many roles, and one of his most appealing aspects is that, no matter what the subject, he always knows the laughs have to come first, without bashing you over the head with the serious point. Indeed Armando’s always been a big fan of silliness and for all its clever dialogue and wonderfully realistic performances, many of the best bits of The Day Today are those which are just plain daft, a la “click’ting stamps”. Although the Saturday Night Armistice doesn’t perhaps live up to the high standards of some of his other work, it was always worth watching an d Armando himself proved an engaging and adept performer as well as a writer and producer. The mission statement of the Armistice was “Noel’s House Party after an arson attack”, the intention being to create a show with the energy and spectacle of BBC1 light entertainment but with BBC2 humour. The bit that we think best sums up how this show succeeded is via this fantastic moment where Armando launches a series of Edmonds-style celebrity pranks, starting off with his targeting of Bob Monkhouse via an elaborate sting involving, er, tapping him on the shoulder and then running away. It’s such a stupid idea, so brilliantly executed – we love Bob looking totally bemused at the end – and as with all of Armando’s work expertly sent up the conventions of TV, taking the piss out of everything. Four weeks’ work well spent, we’re saying.