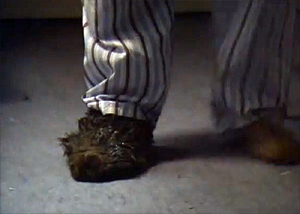 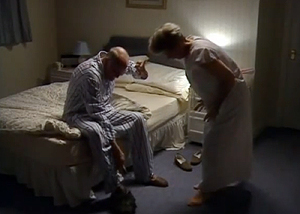 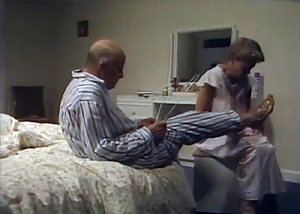 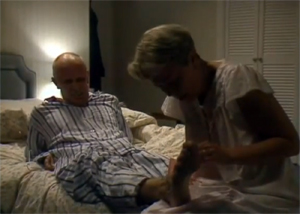 Britain’s best ever sitcom, One Foot In The Grave could probably fill this entire chart on its own (and it certainly won’t be the last time it appears in this list), though it famously had a slow start and it was a Saturday night repeat run in 1991 that brought it to most viewers’ attention, including Creamguide. The concluding episode of series two, Timeless Time, totally blew us away when we first saw it, the first in a series of episodes throughout the run set entirely in one location and, we think, still the best. Based around Victor and Margaret’s attempt to combat insomnia, and mostly shot in complete darkness, the quality of dialogue is absolutely sensational, including Victor’s endless digressions on the passing of time (“That’s in the past now too!”). We’ve chosen the best visual gag of them all, however, when after Victor has to go outside to switch off their malfunctioning car alarm, he returns minus his slipper and instead with his foot in a rotting hedgehog. The prop is brilliant, revolting the audience, and its reveal, alongside Margaret’s squeal, is totally unforgettable. It’s testament to David Renwick’s fabulous scripts that this daft bit of slapstick – we love Victor stumbling around and gingerly prising it off with a coathanger – seems to come about completely naturally. In a lesser show, that would be the punchline of the whole episode, but this was just one of many moments of fabulous comic brilliance – and one very moving moment – in a faultless thirty minutes of comedy.