The Four Bucketeers invade the Beeb, 15th May 1980 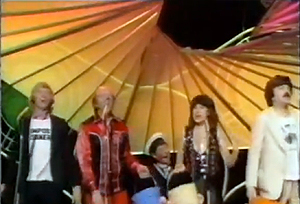 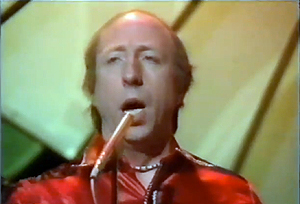 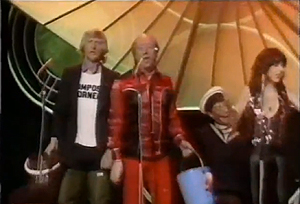 When it comes to Swap Shop vs Tiswas, the differences between the shows can just as well be summed up with their spin-off singles. Swap Shop’s tune, I Wanna Be A Winner, is a glossy professional slice of synthpop, with extremely high production values, which certainly didn’t sound out of place alongside the rest of the chart (helped by the team themselves barely appearing on it). The Tiswas single, meanwhile, is a raucous rugby club singalong with the gang bellowing out the lyrics and all the subtlety of, well, a bucket of water. It was the ‘shop who enjoyed the biggest chart success but the ‘was can be excused given they still weren’t on nationwide and, better yet, they were the only ones to appear on Top of the Pops. There was always something a bit exciting about seeing ITV figures turn up on the Beeb, but such was the democracy of the Pops where if you were in the charts you were on (we’re assuming Travis’ suggestion it “really deserves” to be much lower in the charts than Hot Chocolate is a badly worded compliment). John Gorman of course had experience in this kind of thing, a decade or so after he got to number one in the charts, and he holds the performance together, but the man worth watching all the way through is Tarrant, self-consciously shuffling his way through the performance and his thoughts clearly oscillating between “Ha, I can’t believe I’m doing this on Top of the Pops” and “Christ, I can’t believe I’m doing this on Top of the Pops”. But Sal and Bob plunge into it with gusto and the shambolic nature of the performance makes it all the more enjoyable, like watching your best mates fluke their way into the charts and not knowing how it happened but being determined to make a decent fist of it anyway. You doubt Brown Sauce would have been so unselfconscious if they’d ever made it to the studio, given Cheggers was very much a frustrated pop star anyway, but the ‘was gang didn’t give a toss, which is what makes this performance so much fun.