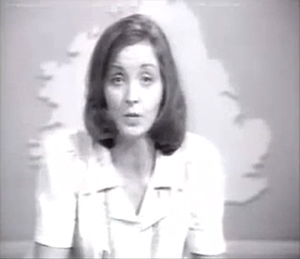 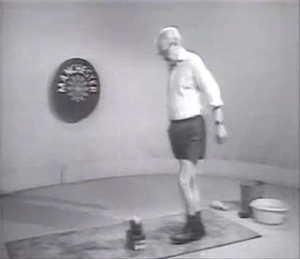 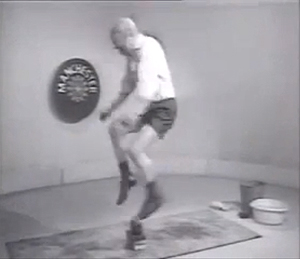 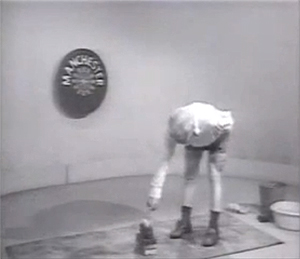 Michael Barratt used to say that, yes, they had skateboarding ducks and so on as part of Nationwide, but after those he would frequently turn to the Prime Minister and conduct a hard-hitting interview – getting the viewers interested with some frippery and then luring them into watching the serious stuff. Unfortunately for him, everyone now only remembers the daft bits, and they don’t come much dafter than the amazing Tony McCabe, who managed to bullshit his way onto national television with his announcement that he could jump on eggs and human noses without breaking them. Wisely, Nationwide decided to forego the noses and instead invite him to the Manchester studio to illustrate his egg-jumping talents. McCabe’s costume of white shirt, shorts and boots automatically tells the viewer that this is a man worth watching, and we join him psyching up for this amazing feat, with a couple of buckets standing by in case of emergency (to put the broken eggs in, presumably). McCabe’s muttered commentary during this endeavour adds to the gravitas (“I skimmed it there!”) and it’s likely the audience are starting to wonder quite how long this might go on. But then comes the spectacular climax where he announces he’s done it! Of course, he has to tell us because as far as we’re concerned he hasn’t done anything of the sort, he’s just jumped over the egg, but no, “I heard a click” and the egg has, yes, “definitely been jumped on”. What’s particularly great about this clip is how totally unimpressed the ‘wide are by Tony’s triumph, and no doubt they were secretly cursing the researcher who managed to get this as far as being broadcast without, it appears, ever having seen this so-called “act” before, or at least not enough to realise that he should actually be billed as the man who can jump over eggs and human noses without breaking them. Even though, er, anyone can do that. Still Tony seemed very pleased with himself and was no doubt the toast of the pub that night, as you would if you’d managed to talk your way onto telly with no talent whatsoever.