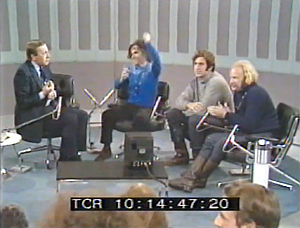 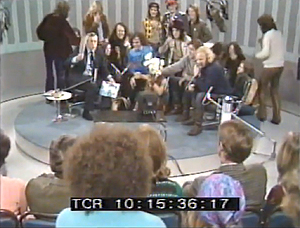 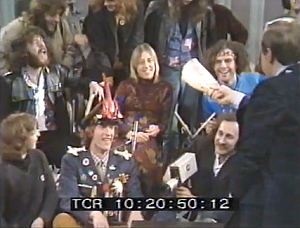 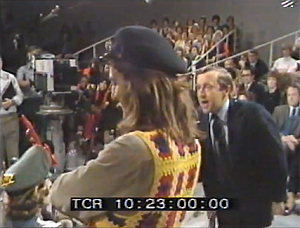 This clip is perhaps a longer version of this memorable encounter than you’d normally see, as Jerry Rubin, the self-styled biggest freak in the world, and his Youth International Party are the subject of David Frost’s LWT show. This was around the time of Oz and the growing counterculture and Rubin and his cohorts were part of a new breed of hippies who had a greater political interest than ever before and wanted to bring about real change through anarchy. Though as it turns out, there seems to be rather less anarchy on display in this interview than just general irritation, to be honest. During the interview Frost wants to bring in a point from the audience but Rubin, eager to break down accepted boundaries, invites the audience to come and join them on stage, with Frost deciding to head in the other direction. Unfortunately any point Rubin or his companions wish to make during the next five minutes are rendered rather incoherent by the fact everyone’s talking at once and the technical equipment can’t really keep up with it, something of a downside to the revolutionary potential of television. Nevertheless, the cameras keep rolling and the show goes on, Frost, who was only 31 at the time, sensing it serves the point just as well to allow them to continue. At the very least the increased informality and breakdown in barriers is enough to convince one man in the audience to come down and challenge them face to face, but then it starts going a bit wrong, including a massive unexplained off-camera crash. But the man who ends up stealing the show is Felix Dennis, former editor of Oz and now a hugely successful businessman, who manages to become the first ever to say “cunt” on television and then messes around with a water pistol. It’s Frost’s show, though, and he comes out of it brilliantly by appearing more bored than shocked by Dennis’ antics, with a brilliantly dismissive “big deal!”. We love Dennis challenging him by asking when he last swore on television, the most pointless argument ever, and quickly brushed off by Frost. But it’s the final line that’s brilliant, as Frost both sums up the whole thing and does his job by announcing “It’s so pathetic, and so childish… and we’ll be right back!” The other great thing about this extended clip is that after they’ve gone to the break everyone just stands around. Anarchy suspended during the adverts.