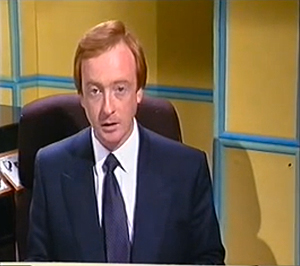 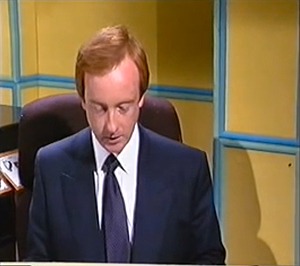 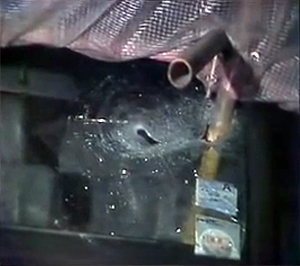 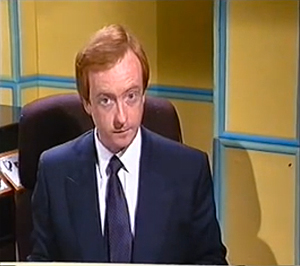 This whole programme, such as it was, became something of a holy grail for TV Cream as, because we were in the North, we were completely undisturbed by the hurricane and only found out about this unique broadcast later, and assumed it was never recorded. We’re sure you know the context behind this, and we’ve said it before but the best thing is not that Michael Fish failed to say it was happening, but that he specifically went out of his way to say that it wasn’t. Anyway, the next morning Nicholas Witchell was woken up by the telephone asking him to get into TV Centre as soon as he can, as not only was he one of the senior newsreaders on call in case of major breaking news, but he also lived quite nearby and could get in past all the fallen trees. When he arrived the building was completely without power, apart from one room – the CBBC Broom Cupboard. Of course, this had a camera in it but it also served as the continuity suite for BBC1, ready to take over at a moment’s notice and fill in whenever anything else went wrong, and thus had its own power supply. Unfortunately the walls were also covered with kids drawings and the desk covered in cuddly toys, so the skeleton staff at the Beeb ran in, hastily stripped it of its décor, and asked Nick to fill. Nick certainly stepped up to the task, given that when he went on air he had virtually no information and no pictures, and spent much of the time on air simply telling viewers not to go to work, before John Kettley was found and brought in to chat with him, the pair managing to keep going for an hour or so before some more people made it in and the lights came back on and something close to normal broadcasting could resume. But it’s Nick’s solitary stint in very reduced circumstances that sticks in the mind, surely the nearest thing we’ve ever got to TV under emergency conditions. He later said that he received a huge postbag afterwards from people relieved after a horrible night to turn on the TV and see a familiar face, a genuine example of public service broadcasting and testament to the Beeb’s dedication to keep going. Thank heavens we’ve never seen the likes of it again.