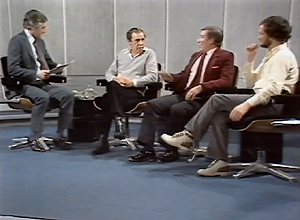 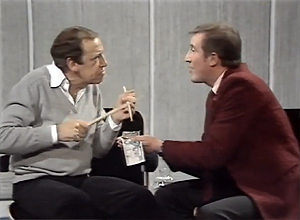 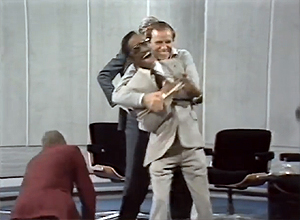 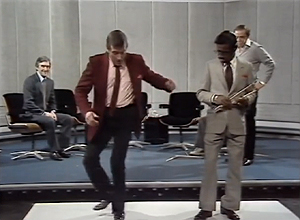 This sequence is really quite something. Parky may be a crashing bore these days, but it’s true that in his pomp his show welcomed bigger stars speaking more candidly than virtually any other chat show. One of the best things about the show was the blend of guests interacting, and famous moments include Kenneth Williams’ debate with Jimmy Reid (although Paul Fox thought it was totally unsuitable) and Peter Cook alongside John Conteh. But here’s the most brilliant line-up of all. First of all there’s Cuddly Kenny Everett who could certainly dominate a show when he wanted to but in this instance he’s content to sit back and enjoy the ride like the rest of us (though he certainly provides some fine comedy later in the clip). But the masterstroke in booking Buddy Rich, one of the greatest musicians of all time, alongside the phenomenally talented Roy Castle. There’s clearly huge respect between the pair, with Castle a huge fan but also a very accomplished musician himself, hence he can create a fabulous bit of business to allow Rich to showcase his fantastic talents, while Roy shows off his skills to great effect. It’s already great fun, but then enter stage left a surprise guest. These days “surprise guest” is usually code for “we haven’t booked anyone yet” but here it’s genuinely a surprise for the audience and the guests alike, as Buddy’s old friend Sammy Davis Jr strolls in, much to everyone’s absolute delight. As Parky points out, Davis happened to be in London that day and when he found out Rich was on the show, rang up to ask if he could stop by. The mutual respect between everyone – including Cuddly Ken, who we’re thrilled to hear Sammy say he admires, and also mention his sketches with Lionel Blair – is apparent to all and stops what could turn into to simply mutual backslapping into fantastic entertainment, with Parky having the wit to sit back and let the conversation flow. There are few occasions when a TV show appears to be just eavesdropping on a private conversation, fewer still when that is also worth hearing – but it happens here.