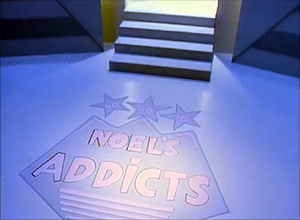 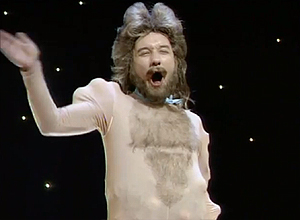 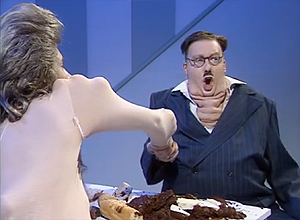 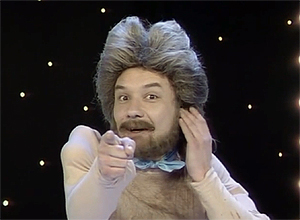 Before you watch that, watch this, because this is a great example of a parody that’s now actually become more famous than the show it’s parodying. But as you can see, there was an actual Noel’s Addicts, which ran for one series in the summer of 1992 and involved Noel meeting people with ker-azy hobbies and interests. It’s only by seeing that you can appreciate how accurate the title sequence, theme tune and set are, though from the moment that “Noel” reverses onto the set in a body stocking not much else has much to do with reality. In fact the VHS of this series actually featured an introduction before Ken Taylor’s appearance (in which Noel addressed the audience as “boy scouts”) which might have made it a bit less mystifying, but regardless of whether you know what it’s parodying the whole sketch is among the silliest pieces of television ever made. That said, it does actually make some proper satirical points along the way, including Noel’s ridiculous overexaggerated laugh, his liking for a weak innuendo, the relishing of cock-ups and, of course, how he loves nothing more than to be “surprised” by his old friend DLT with a picture of him where he looks slightly different. In between we have two notable comic creations from Vic Reeves, including Chris Bell – a name the pair apparently spent ages pondering over to find the right kind of mundane name – who would make various other appearances on The Smell of Reeves and Mortimer to generally irritate people. But the star of the show is Noel himself, in an unforgettable costume – we love how he fiddles with one of its protrudences while walking across the set – with a completely bizarre accent. We don’t know what Noel made of it, but any offence would doubtless be countered by the fact it’s just plain bloody stupid – and that’s why it’s so great.