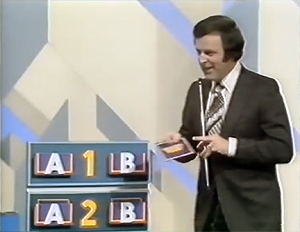 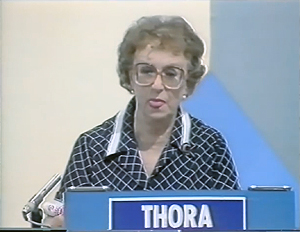 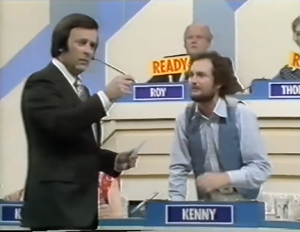 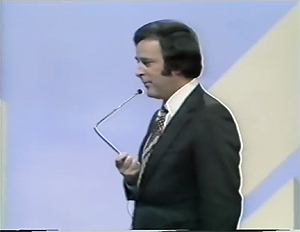 Terry Wogan always said that his favourite moments on Blankety Blank were always the occasions when nobody scored any points or won any prizes, as to him that summed up the whole spirit in which they played the game – a bit of harmless fun to while away a happy half hour. At the end of it nobody’s life was changed but they’d had a lovely time, and never more so than when Kenny Everett, surely the ultimate Blank guest, was messing about – and this clip is surely the show’s most famous moment. Tel asks a pleasingly late seventies pop culture question before engaging Ken in a bit of chat, all the while holding his trademark wand – his ridiculously oversized microphone that, fitting perfectly with the rest of the show, has no point whatsoever as he’s clearly wearing a microphone on his tie, and is only there to give Tel something to do with his hands. Cuddly Ken was always happy to disrupt a show if there was a requirement – sometimes not always by design, such as the time he only realised he was supposed to be on Afternoon Plus when he was watching it at home and arrived at the studio with ten seconds to spare – and so what better way than to attack the wand? It gets a huge audience laugh, and Tel’s perfectly happy to act as Ken’s straightman, having to spend the show looking ridiculous but, again, knowing it didn’t matter as long as it was funny. This memorable moment led to a continued running joke regarding Ken’s attempts to destroy the wand (“It worked in rehearsals!”) but this bit of inspired daftness was never bettered – and established Blankety Blank as the silliest show on the box.