ANNUAL TIN-RATTLE from Television Centre, once a reasonably entertaining celebrity drop-in centre affair, now a dreadful parade of promotional star turns and role swapping (“this year: Casualty *do* We Will Rock You; plus, the BBC newsreaders as you’ve *never* seen them before – since the last time!”). Actual campaign began on radio on Christmas Day 1927, then became a regular ten-minuter on a Sunday night telly, until ex-NATIONWIDE nabob Mark Patterson suggested turning it into a telethon and Bill Cotton dutifully cleared the schedules. The first televised moneyspinner found – naturally – Lord Wogan holding fort from, bizarrely, the Cunard Hotel, Hammersmith at what looked like a rudimentary garden party with groups of fellow personalities seated at numerous round metal tables regaling Terry and us with an anecdote, a song and a shenanigan or two. Something of a freewheeling fancy, all told, albeit with SUE LAWLEY and ESTHER RANTZEN on hand to talk about “why we’re really here tonight”. Early 80s efforts pretty much forgettable, although proceedings were shamelessly hijacked in 1983 by that three hour long special 20th anniversary episode of Dr Who with all the Doctors in it apart from the one who was dead and the one who couldn’t be arsed. Michael Grade had the idea of fashioning a whole night’s frivolity around the cause; somewhere along the way that horrendous kiddie-shrieking song was written – “We are the future/we are the seed/if you want to help/help Children In Need” – probably by Mike Batt or BA Robertson, subsequently adopted as the official CIN “theme”. Dr Who “trick” repeated a second time for the show’s 30th anniversary, this time by way of – of all things – an EastEnders crossover filmed in 3-D. Smell-O-Vision “themed” 1995 offering similarly stank. Will remain on the third Friday in November for evermore, or until Tel croaks it, whichever comes first. 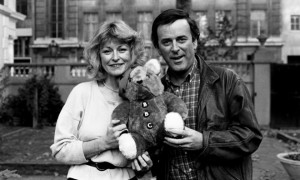