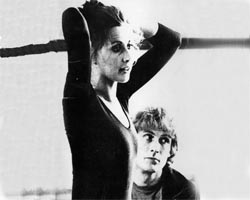 In 1971, eager, slightly gauche twentysomething journo William (Bill Nighy) leaves Nottingham for a tenure on a Fleet Street tabloid. After a string of tepid affairs, punctuated by the traditional liquid diet, he encounters Caroline (Kate Nelligan), an impossibly beautiful assistant at an art gallery. As he jumps in with both feet, he discovers Caroline is very much a girl of the London ‘scene’ – flitting from glamorous job to glamorous job (she gets sacked from the gallery, then becomes a photographer, gets involved with a rock band, and finally enrols in a dance school) with very little regard for any of them, and stringing William along by alternating him with endless tempestuous affairs, again none of which seem to involve any emotional engagement, or indeed effort, on her part. William is, of course, the opposite – he plugs away at the tabloid, even though he and his fellow hacks (including a lank-haired Mel Smith as old hand Xan) detest the crap they’re expected to fill the paper with.

Evenings with Caroline at William’s flat prove fraught and fruitless, despite Caroline’s admission of having feelings for William above and beyond the usual drill – which provokes fear and awkwardness rather than anything deeper. Matters aren’t helped by her refusing to contact him, and then turning up at his office to surreptitiously watch him at work. William eventually gets sick of this treatment, and breaks off seeing her. Finally, he makes a rather abortive protest at a staff conference about the uselessness of it all (‘I dread a lifetime randomly producing something which we all distrust and despise. I dread the effects on my person of a lifetime given over to royalty and dogs.’)

Then, he hears of Caroline again – her weight down to seven stone, she’s been committed into a mental hospital, and it’s not made clear if she’ll ever be able to leave (William confides ‘I was grateful […] thank God she was mad.’) Finally, we see William commuting from Fleet Street several years later to a suburban wife-two-kids existence – he’s managed to escape. It’s a very minimalist turn from Hare, the seedy world of early ‘70s Notting Hill and Fleet Street providing a very different backdrop from the period detail of Licking Hitler (as with that film, Hare directs as well).

The entire play is far more cinematic than most Play for Today entries, even those shot wholly on film, as the use of William’s narration as a linking device between various disjointed scenes and images – almost like a more serious version of Annie Hall at points – is as far from the ‘filmed play’ origins of the strand as is possible to get. This is handy for extracting the unreality out of the realism – it’s clear we’re getting William’s selective version of events.

As a diatribe against the modish, emotionally detached ‘urban’ lifestyle, it’s more effective than, say, Hard Feelings (see 1984 below), mainly because the characters, even down to bit parts like Xan and William’s Arabic scholar neighbour Andrew, are clearly drawn rather than rough hewn ‘types’ set up to be easily knocked down. The acting is fantastic, too, especially Nelligan’s cold inscrutability, and of course, Nighy’s beseeching earnestness, often bordering on the pathetic but never collapsing into chest-beating helplessness. Mike Williams’ cinematography is also first rate. A fine example of the refined films that were emerging from the strand from the late-’70s onwards, often superior to anything the British film industry was turning out at the same time.