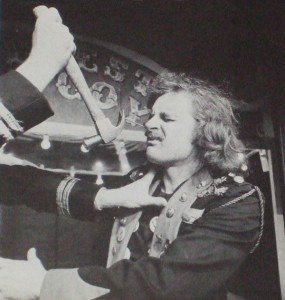 They may be full of identikit wisecracking unicyclists these days, but not so long ago the streets, precincts and school halls of the nation thrilled to the shoutily earnest strains of agitprop theatre. A spate of (relatively) massive Arts Council subsidy, a post-sixties revolutionary hangover and, most importantly, an abundance of out-of-work actors combined to produce a rich and decidedly nutty tradition of energetically hectoring, unashamedly didactic, and often willfully obscure “happenings” in public places orchestrated by a generation of young optimists who made it their mission to raise collective consciousness, spread the socialist gospel, agitate the complacent youth and – let’s face it, this was what it was mainly about – dress up stupidly and draw attention to themselves at the drop of a hat.

This wasn’t just some rarefied by-product of the nation’s underground arts labs. It’s instructive to note how many latterday stars of children’s telly began on the fringe. Colin Bennett, for instance, used the ’70s avant-garde circuit as the perfect training ground for playing accident-prone caretakers the following decade. Then there was Ken Campbell, the charismatic Dickensian uber-loon of the alternative fringe who, when he wasn’t staging seven-hour sci-fi epics in dingy rooms above pubs starring Bill Nighy and Chris Langham with sets painted by Bill Drummond, took his Roadshow around the country’s grottiest venues, combining re-enactments of unlikely urban myths with crowd-pleasing stunts, usually involving a hapless Sylvester ‘Sylveste’ McCoy (in the days when his hair, coincidentally, made him look a bit like Paul McGann) having ferrets stuffed down his trousers or a nine-inch nail hammered up his nose. And the number of mid-period Play School presenters who were strangers to a Brechtian matinee could be counted in the fingers of one hand. Agitprop was, in its own perverse way, the National Service of television presenting – the moment it was disbanded, you got the likes of Andi Peters clogging up the screen. Get some in!

This subsidised mucking about was a thing of infinite variety, but you could fairly reliably boil it down into four types.

Workers’ Theatre: Troupe of bright young types roll up to a factory cafeteria, bash out a play about the dignity of labour for the edification of the workforce, often with someone in a cardboard top hat and pig mask playing “The Chairman” for a few easy cheers from the ranks (this sort of stuff worked on a level of subtlety and nuance that would make Steve Bell blush). Lots of characters carrying conveniently explanatory placards. No-one mislays their trousers,  unless it’s to make a point about the moral bankruptcy of the bourgeoisie.

Community theatre: As above but in a temporarily disused gas showroom plus stacking chairs, and with less fat cat baiting. Worthy explorations of pressing local matters with a Q&A group session afterwards. Weak tea on tap. No canapes.

Educational theatre: A Volkswagen bus full of extremely eager young folk arrives, Godspell-style, at the school gates to captivate the upper second with a riot of sub-panto songs and Why Don’t You..? method acting. Prepare for an enchanting afternoon as our merry band weave loud but reasonably straightforward stories with a vague and uncontentious moral (“don’t be racist”, “drugs: hmm”, etc). Or failing that, get the whole class involved in some group workshoppery (nine times out of ten this will involve the mass recreation of a Victorian coal mine). If you’re extremely lucky, you might get a visit from Ken Campbell in his Paraphernalia phase. If you’re not so lucky, it’ll be three sociology postgrads in head-to-toe denim who’ve read far too much Edward De Bono.

Performance art: Oh, here we go. Who’s the in the park/town square/bit of wasteground opposite the Co-op? Why, ’tis your friendly neighborhood performance art troupe, either calling themselves something earnestly descriptive like Inter-Action or summat zanily anarchic like John Bull Puncture Repair Kit, in their white boiler suits, army surplus gas masks, comedy rolled-up shirt fronts and rainbow braces, lugging their step-ladders/birdcages/megaphones into view for another post-literate assault on the daily grind of urban reality. There’ll be gibberish, mock violence and plenty of hand-held percussion. The best bit will come when some bemused old dear wanders obliviously through the action on her way back home with half a pound of brisket. You’re not shattering her entrenched preconceptions of bourgeois society that easily, sonny.

And then… yes, of course, Mrs Thatch went and took it all away again. After Mary Whitehouse got wind of what two skyclad actors were getting up to on stage in The Romans in Britain at the National Theatre in 1980, the harrumphing cry of “buggery on the rates!” went round the nation’s Con clubs, and subsidised theatre found itself exiting stage left, to make way for a resurgent West End courtesy of that nice Mr Lloyd Webber. While it’s easy to roll a retrospective eye at the self-absorbed optimism of it all from this distance (and, admittedly, a lot of this stuff caused eyes to roll en masse even back then), only the most hard-hearted We Will Rock You disciple can fail to shed a tear for the passing of the agit, and indeed the prop. Where today could you nip into a dingy basement in your lunch break, watch half an hour of a bloke in German army regalia with a toy pig on a skewer shout impenetrable stuff about the crimes of Rio Tinto while people dressed as chairs skip about in an endearingly uncoordinated manner, and come away with fifty pence change? Unless you’re in Edinburgh in August. And that doesn’t count.