7pm BLANKETY BLANK, BBC1
“Please don’t fiddle with the controls on your set. Just because Terry Wogan isn’t here, it doesn’t mean your set’s broke.” A seminal moment in quiz history here, as Lord Terence passes the wand to Les Dawson, who promptly snaps it across his knee. We think the Blank regeneration is second only to the Generation Game as the most successful replacement of a host in game show history, although history has perhaps not been quite so kind to Les’ stint, thanks mostly to the much poorer quality of guest. While Tel got to work with Beryl Reid, Roy Kinnear and Cuddly Ken (who oddly never appeared with Les), Les ended his run swapping gags with Gary Davies and Adrian Mills. Throughout, though, Les was never less than brilliant with his Quasimodo impressions, brilliant gags and “a Blankety Blaaaank… (claps hands, stamps foot) chequebookandPEN!” catchphrase, and meant that while he started by saying “I feel about as comfortable as a lame turkey sat on a pile of Paxo listening to Christmas carols”, it was an absolute triumph.

9pm JANE IN THE DESERT, BBC2

“In fact, it’s all thanks to a special technique known as colour separation overlay…” Rarely did a week go by in the eighties without a TV show totally out of ideas explaining the magic of CSO, seemingly the most exciting thing to happen to the media since John Logie Baird snuffed it. As the recent episode of Not Going Out set entirely a car illustrates, it still doesn’t seem to have been perfected, but producers certainly used it with gusto, not least in this eye-straining adaptation of the Mirror comic strip that single-handedly won us the war. This extremely stylised production was quite visually arresting, although it’s a fair bet half the viewers were a little distracted by Glynis Barber in her bra and pants throughout. Playing out in ten minute chunks every night this week, this was our final soiree with Jane on TV, although we’d see her again in the disastrous film Jane And The Lost City in a year or two. Sadly, nobody thought to adapt the best-selling Jane’s Fighting Ships. 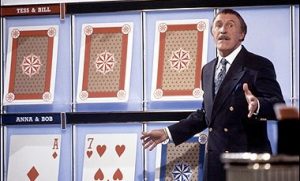 7.30pm Play Your Cards Right, ITV
While Les was settling down in the role of game show host on the Beeb, the master quizmaster was in his imperial phase over on the light channel, now kicking off his sixth series of this evergreen format. It was the series that brought his career back from the dead, after the disastrous Big Night, and came about after he watched an episode of Card Sharks and thought that would be the right kind of show to mark his return to British screens, and arranged to buy it. Immediately after he’d done that, though, he saw Family Feud and thought he’d rather do that, but that had already gone and, despite Michael Grade asking Bob Monkhouse if he wanted to swap (“It’s very physical, much more Bruce’s thing”), he was stuck with the first one. In the end it was no great tragedy and he enjoyed huge success with it, thanks to his million catchphrases meaning the viewer could more or less recite the script along with him (“Higher for the gaaaaaame!”). Such a shame we never got to see what went on in the LWT bar after he invited them for a drink, though.