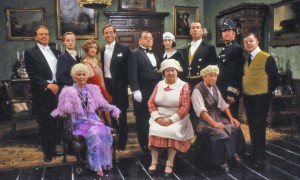 YET ANOTHER load of You Have Been Watching lummoxery from David Croft, as usual set in some hilariously over-cliched recent period of British history, and as usual starring SU POLLARD, PAUL SHANE and JEFFREY HOLLAND. This time the laughs were to be found – allegedly – in a 1920s house where, and hold onto your sides now, the upper classes are battier than those below stairs! And everybody’s either trying to diddle or screw everyone else! Basically, Shane and Holland gain the employ of Lord Meldrum (DONALD HEWLETT) years after saving his life in the First World War, only to install Shane’s – gulp – daughter Su Pollard as parlourmaid. Cue “oo eck!” accidents with dusters, slippery scullery floor scrapes and falling out of cupboards in ill-fitting clothes. Also living in the house are, variously, a demented biddy, a lesbian who dresses as a man, a randy pensioner, numerous stupid toffs and toffesses, wailing cooks, dim-witted errand boys and BARBARA WINDSOR. Oh, and BILL PERTWEE used to call round for a bit of tongue from the head cook. And some food as well. Best thing by far was undoubtedly the theme tune, crooned by none other than SIR BOB MONKHOUSE in his best clipped-voice posh-man impersonation (“From Mayfair to Park Lane/you will hear the same refrain/in every house again, again…”) replete with PAUL SHANE interjections (spoken, thankfully: “You rang, m’lord?”). Various topical events of the 1920s turned up, including – implausibly – the General Strike. Ended when the Meldrums ran out of money and had to sack everyone. Now that’s our idea of going out on a high.