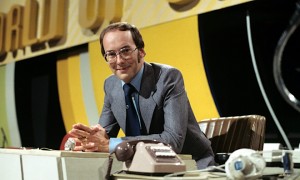 ITV’S ANSWER to GRANDSTAND, of course. First in the presenter’s chair was EAMONN ANDREWS, introducing a line-up that ran something like this –

PETER LORENZO of the “Sun”analyses the latest football news and sums up the day’s outstanding games.

IAN WOOLDRIDGE of the “Daily Mail” reports from South Africa on the M.M.C. tour.

POOLS SERVICE: an exclusive feature on the Treble Chance and the immediate news of the day’s probable dividends.

Then in ’66, one “Richard Davies” took over – better known as moustachioed silver-streak DICKIE DAVIES, and billed as such from about ’72 onwards. FRED DINENAGE was a co-anchor for a while. In its late ’70s pomp, the running order went:

13.00 International Sports Special: some crap novelty thing from the US, such as cliff diving or truck racing; once they actually had the World Bus-Jump Classic: someone jumping a bus over 100 motorbikes. Didn’t work.

13.20 (after the news) The ITV Six (later Seven) – a seven horse-race accumulator beloved of Ladbrokes-frequenting uncles in front rooms up and down the land.

16.50 Results service (always got the football results in late).