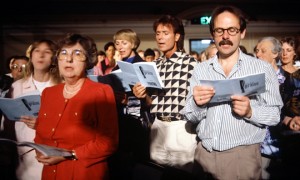 PARISHONAL POW-WOW showcasing abnormally packed congregations doled up to the nines singing in an exaggerated fashion, interspersed with reflections on the locality from the likes of civic dignitaries, community leaders and the world’s oldest lollipop lady. Format barely touched since day one. Famous face (CLIFF MICHELMORE, PAM RHODES, MICHAEL BARRATT, DEBBIE THROWER) welcomes you to “the beautiful county town of…” while loitering in a churchyard. Then it’s inside for the first hymn (the words on the screen so you can sing along). Then it’s back outside for a nose around the vicinity. If it’s a fishing town, there’s always a shot of locals bringing in the first catch of the day at 5.30am. If it’s in a city, there’s a shot of a workman in an orange bib climbing onto a bus at 5.00am. More hymnnage follows. A celebrity born in the area will show up for some reminiscing (“I remember the Harvest Festival of 1957 when I dressed up as a wheat sheaf and forgot the words to the second verse of All Things Bright And Beautiful!”). A local sob story is told. Prayers will be read. During the final hymn the camera will pick out people in the congregation who were featured in the programme earlier. Then it’s a dutiful farewell from our host and that strident organ theme to send us on our way feeling suitably wretched. An immovable feast at 6.40pm on Sunday teatimes for decades, even turning up on Christmas Day, though latterly its timeslot has crept back to 5.30pm. Hosts now include JONATHAN EDWARDS and also DIANE LOUISE JORDAN who lied about being a Christian when applying for the job, only for prolonged exposure to the book of Jobe and all 3,781 verses of Guide Me Oh Thou Great Redeemer to convert her on the spot.