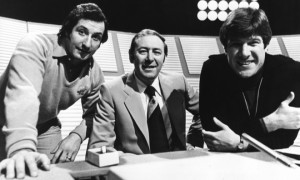 “SPORTING WIT AND BADINAGE”, as Ceefax often had it, which somewhat underplayed the whole quizzing element if you ask us. Avuncular, easily entertained DAVID COLEMAN presided at just the right pace, except when making sure to ask the guests “you had a good season last year, and you’ll be hoping for more of the same with the world championships coming up?” in the middle of a round. BILL BEAUMONT seemingly spent decades at the helm of one team, except for a couple of weeks when Coleman was off with shingles and he took over as a snail’s pace host. Opposite massed a phalanx of overexcitable captains, most notably WILLIE CARSON and EMLYN HUGHES of John Reid-related royal handbagging and ill-fated attempt to make “we think…” a national catchphrase. The Mystery Guest round added “can you recognise this sporting star going for a day’s fishing?” intrigue and hope that it wasn’t someone you were particularly proud of, a tyro RAY STUBBS directing many an example. You knew Christmas was coming when the annual Mystery Guest competition started, the winner picked out in the series finale by the captains from a mound of envelopes dropped from the studio ceiling. Supposedly annual surveys referred to once a series placed What Happened Next? as the show’s most popular round year after year. The score is Emlyn seven, Bill five.