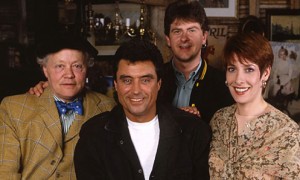 AH, THE gentle swish of a watercolour paintbrush, the chiming tinkle of an endlessly hummable signature tune…the smell of an ace, if preposterous, classic. LOVEJOY was the business, despite its titular hero being a blackguard, a cheat, a rogue and a sporter of the Phil Collins Jacket And Jeans. IAN MCSHANE was your avuncular antiques dealer, running juvenile amok in East Anglia with PHYLLIS LOGAN (posh love interest Lady Jane), DUDLEY SUTTON (dandied loon Tinker) and CHRIS JURY (hapless klutz on motorbike Eric). Each week the gang fell foul of ludicrous plot devices, ancient earthenware, foreign crime syndicates, a man from the council, MALCOLM TIERNEY (Charlie Gimbert) and inclement weather. First series ended with our man being sent to prison, only to emerge five years later with a bouffon and a propensity for wearing Motorhead T-shirts, driving a car called Miriam and helping out old ladies in peril from marginally less ethical dealers. Show then gained a huge following and, weirdly, a huge currency amongst the luvvie community, with the likes of JOHN GIELGUD and JOANNA LUMLEY showing up for a bit. Inevitably ran out of steam towards the end, with McShane apparently calling the shots and the likes of Logan and Dury pissing off as a result. Still, at its peak it was nonsensical wonderment, especially the bits where Lovejoy talked straight to camera a la Francis Urquhart and Garry Shandling.