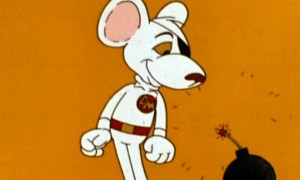 “CRUMBS!” ONE-EYED cartoon white mouse (DAVID JASON) and a short-sighted mole (Penfold – TERRY SCOTT), despite having only one and a half good eyes between them, continually outwit wheezing frog BARON GREENBACK and STILETTO the mafioso crow (BRIAN TRUEMAN) before reporting to Jimmy Edwardslike Colonel K (EDWARD KELSEY). Another superlative effort from Cosgrove-Hall. English-as-hell humour, in-jokes for the parents and Pythonesque fourth wall narrator interrupting the action make this long overdue a full revival. The mystic stick (“Are you the hairy old twit with the twig thing?”), cunning plans (“Aha! Greenback wants us to think that he thinks we’ll think there isn’t a drop at all. But I know he thinks that I know he thinks there is!”), the Time Traveller’s Potting Shed – it was all here. Dangermouse. Powerhouse.