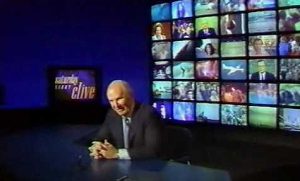 FROM BEHIND an oil tanker-sized desk, from within a imperially-dark blue set, in front of a textbook braying studio audience, backed by a bank of shimmering small screens, the erstwhile Vivian James, sometime of Kogarah, Australia, smartened his synonyms and annotated his anotyms over clips of Japanese game show contestants killing each other. From there it was but one squint of a tiny eyeball to what followed. The Channel 4 chat show with bumptious guestage the like of Alan Coren, AJP Taylor and, naturally, Germaine Greer. Commentating on Formula One for a laugh. Going swimming with some Playmates at Hugh Hefner’s Playboy mansion. Talking by satellite to Vitali Vitaliev. Inventing YouTube. Talking by satellite to Mel Brooks. Stormin’ Norman Norman Stormin’ Norman Schwartzkopf. Talking by satellite to Billy Connolly. Playing role of guest judge on the GENERATION GAME. Talking by satellite to TV evangelists/cross-dressers/cross-dressing TV evangelists. Riding the Slippery Dips in Sydney. Getting fitted with a hairpiece in LA. “I’d received word that an extremely eminent and attractive female foreign dignitary was in town and desperate to meet me.” Getting to ‘Finally Meet’ Frank Sinatra. “And the winner of this year’s Teatowel Wearer Of The Year award is…Yasmin Arafat!” Jerry Hall, Jane Fonda, Elle MacPherson, Louise Lombard, Caroline Langrishe and a million other glamorous guest starlets for those end of year specials. And, sadly: “Now, to sing us out, in her inimitable style, and you should try imitating it…” “…Allo Clive! Eeez it me yurrrr looookin furrrrr?” Ill-advised defection back to ITV in the mid-90s made him look tired, shabby and shameless. But then who wouldn’t, faced with the task of interviewing Geri Halliwell?