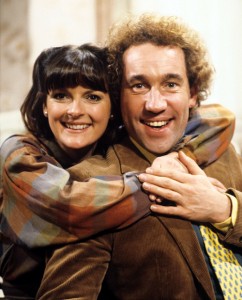 TEXTBOOK EARLY example of the “middle way” sitcom – the sort that was trad as you like in appearance, but quietly demented under the bonnet. SIMON CALLOW was Tom Chance, a straight-laced young fogey with a bizarrely stunted patrician speech pattern (definite and indefinite articles vanish from sentences, result somewhat like foreign office flunky reading out minutes of last meeting). BRENDA BLETHYN was his naive, intractably nervy girlfriend. Tom had three significant characteristics: an absurd network of influential contacts, the ability to down a pint of banana lager in one five-second gulp, and a life full of preposterously calamitous of the kind you only get in, yes, crap sitcoms. Cue houses collapsing, cocaine being swapped with wallpaper paste etc. One episode revolved around his house being invaded by army recruits on a scavenger hunt, wherein Tom promptly supplies all the necessary objects, including a “picture of Shirley Williams in the nude”. How come? Picture was of Shirl as a baby. BILL PERTWEE played himself, i.e. a bemused local sergeant. (“A problem’s like a sherbet dab. It’s only there to be licked!”) Final series ‘story arc’ culminated in a wedding beset by imprisonment, prostitutes, a shit-smeared cake, the theme tune being played as incidental music on a piano (always a winner, that) and Stephen Fry as a liberal vicar.