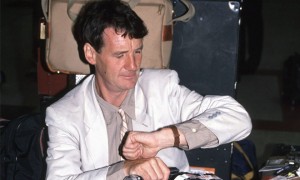 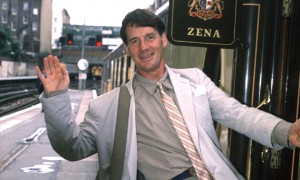 “CAIRO? CAIRO? One. One! One way! Yes, just one. One way!” It’s frightening to think this glorious, nerve-wracking, avuncular, dignity-shredding, heart-stopping epic gallivant around the planet was first offered to ALAN WHICKER, MILES KINGTON and even NOEL EDMONDS before the Beeb mercifully picked up the phone to place a conveniently on-camera call to MICHAEL PALIN. Originally it was going to be done live, with daily satellite updates beamed back into, presumably, WOGAN, GOING LIVE and, erm OPEN AIR. This was quickly junked for what we got: a stunning set of films plotting Palin’s progress around the globe against the clock, the weather, the vagaries of shipping merchants, the machinations of trouser-eating parrots, unexpected bombs and the impenetrable expectations of dozens of besuited customs officials. Demented missions, including joining a gang of rubbish-collectors on a Venice gondola, working in the kitchens on ferry to Alexandria, sampling a giant pipe in a Cairo cafe and landing a walk-on in an Egyptian film (“Once again for me, I think!”) were thrown in just in case we got bored of seeing Mike walking on and off boats. Which we didn’t, because it was Mike, and he was clearly having the time of his life, marvelling at unexpected sights then essaying more bits of business involving recalcitrant irons, handkerchiefs and Bruce Springsteen-loving dhow boatman. You almost wanted him not to succeed so he’d have to do it all over again. Later efforts – POLE TO POLE, FULL CIRCLE and so on – were fun enough but missed the gut-level race-against-time adrenalin awash here. Now what was it again, sir: one? Just one?