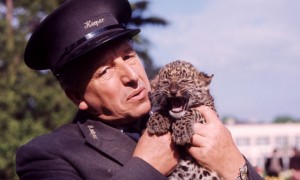 MILD-MANNERED MENAGERIE of human foes masquerading as zany zoo awareness initiative that went the way of, well, zoos. JOHNNY MORRIS was the “Keeper”, forever chatting very very slowly with his apes and hippos (who had either timid, falsetto whines or slow, bassy “Oooh, hullo Johnny” voices) with no mouths moving on fauna or keeper. Perhaps that’s what killed it off. Later acquired colour, psychedelic wah-wah version of the original cha-cha theme and TERRY NUTKINS as sidekick, but still majored on very very slow features, typified by lethargic sealion mascot GEMINI, as commemorated in song by Morris. Soldiered on bravely with epic dolphins-in-lorry saga and rockhopper penguin as in-studio foil, but culled in merciful early 80s costcutting bonanza that also did for CRACKERJACK.