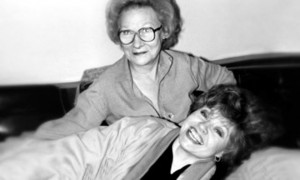 SYBIL FAWLTY lives one floor below the snooty one off PLEASE, SIR! and one floor above someone who looks and sounds like Lynda Day off PRESS GANG but, sadly, wasn’t. Except the biddy upstairs is actually her mum, and the tearaway downstairs is her daughter, and the gay bookshop owner round the corner is her best friend. Much moping and wordplay ensue. Granny obsesses about getting enough iron in your diet and the latest bit of gossip from Valerie Brown on the pension counter’s sister Mary. Mum cracks droll remarks and weeps about absence, through death, of titular husband. Sprog runs amok with crimpers and faded jeans. Studio audience unsure where the jokes are. [cref 8004 Began life on Radio 4], where perhaps it should have stayed.