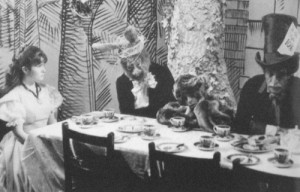 The Wednesday Play wasn’t afraid to approach the same source material from different directions, as here, with Dennis Potter’s exploration of the undertones of the Lewis Carroll books scheduled a year before Jonathan Miller’s famous adaptation in the same strand. An elderly Carroll is accosted on a train by a grown-up Alice, prompting flashbacks to his time writing Alice in Wonderland and his time spent with the young girl, to the consternation of her mother and his Dean. The subject of child abuse is present as an undercurrent, but never openly acknowledged. Scenes from the books are played out in front of John Tenniel-esque line-drawn backdrops. Heavily reworked some twenty years later as the film Dreamchild.