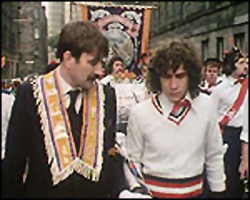 Jon Morrison plays an eager young mace-twirling Orange Parade leader in Glasgow, gradually finding out the unpleasant, violent truth behind the symbolic pageantry. Based on the tales of his own Greenock childhood with which former shipyard worker Peter McDougall regaled Colin Welland while painting his house when he was working as a decorator, and written up into a play at Welland’s behest. Due to the politically sensitive subject matter, the play was withheld from transmission for several years. Directed by John McKenzie.