An adaptation of the feted 1970 Royal Court production of David Storey‘s play, directed by Lindsay Anderson (who helmed Storey‘s This Sporting Life), one of several early Play for Today entries screened in association with the Canadian Broadcasting Company (Reddick and The Write-Off being the other two).

Two amiable old duffers – tweedy, nostalgic Harry (John Gielgud) and dapper, rakish Jack (Ralph Richardson) meet on a sunny terrace one afternoon, and begin indulging in small talk about life, the weather, fishing, travel, the weather, the war, the weather… It gradually becomes obvious (though not to the two gents) that this conversation is going nowhere (the dialogue throughout makes ’60s Pinter sound like Hamlet’s soliloquy), and despite the camaraderie they have nothing to really say to each other, or if they do are entirely incapable of saying it. Two middle aged women, the bitter, cynical Marjorie (Dandy Nichols) and the bawdy Kathleen (Mona Washborne) indulge in a broader, more down-to-Earth conversation of similar elliptical pointlessness. When the two parties meet, their twin streams of blether collides in a flurry of non-sequiturs and mutual incomprehension, though some salient points begin to leak out, and we learn the four are inmates in a mental home, having been sent there for various reasons (Kathleen is violent and suicidal, and Jack, it’s alleged, is has committed paedophiliac indiscretions). A young man, Alfred (Warren Clarke) appears from time to time, apparently an orderly at the home (he’s entrusted with menial fetch-and-carry jobs), uttering few words (Kathleen alleges they ‘took a bit of his brain‘) and proudly demonstrating his strength by lifting the garden furniture with one arm. Finally, the two old fellers are left alone again, musing fitfully on the Old Empire, before both lapsing into a tearful silence.

What with the mutual lack of communication between the upper class men and the working class women, the uncommunicative, tough youth, and the sad, useless reflections on past glories both personal and national, the ‘home’ as microcosm of Britain angle is obvious, but, crucially, never over-schematically forced on the characters, or bludgeoned into the script – it becomes clear as the mad chatter carries on, quite naturally, and once accepted, works. This is down to Storey’s fine writing as much as the performances, which – while Gielgud and Richardson are, of course, the stars – are excellent all round. The two old girls’ music hall-style dialogue (‘See the doctor about you, my girl!’ ‘Oooooh!’) is wonderful, contrasting with the bluff, pronoun-free empty musings of the men. The final triumph, perhaps, is the emotional impact of a depiction of madness that never physically manifests itself on-screen – think of all the stereotypical room-trashing, screaming breakdowns that have been screened in the name of drama over the years. We’re not just invited to appreciate the metaphorical conceit, or pity the old sods – there’s an identification here, in the end, with our own daft, often lonely, lives which gives this play its impact. All inmates in the end, we are. Had a cousin once… 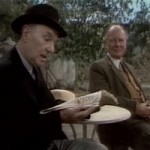 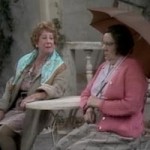