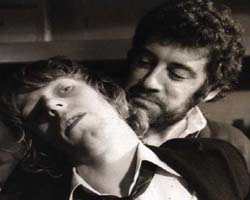 Central, and best remembered, play in Gimme Shelter, Barrie Keeffe’s trilogy of related single-act dramas set in or around a storage shed on the playing field of a comprehensive school. Two teachers – Lynne, a well-meaning female teacher and Ton, a hard-man games teacher (Gareth ‘Blake’ Thomas) are caught in flagrante by a disillusioned pupil, who’s just left school with no O-Levels and a stinking report, in the storeroom. Said pupil gets the headmaster in, then holds them hostage by holding a lit cigarette over the petrol tank of his motorbike (which he’d smuggled into the storeroom) for some sadistic table-turning revenge.

Smart commentary on the dehumanising education system by ex-teacher and future Long Good Friday scripter Keeffe. None of the teachers, to their embarrassment, can recall the kid’s name, and he refuses to tell them. They try abuse, reasoning and eventually empathy with him, but he’s adamant that the comprehensive school system is a joke – “just like the secondary but bigger”. Eventually, with night drawing in and police surrounding the hut, Lynne gets really talking to him and they start to dance, then Ton sees his chance and wrestles the Kid to the ground (not Lynne’s intention at all). The siege is at an end and, to Lynne’s horror, Ton administers a massive kicking to the kid.

A repeat showing was cancelled after protests from Mary Whitehouse about the ‘imitable acts’ of the boy protagonist. Incidentally, the two plays framing this in the original trilogy, Gem and Getaway, concerned a would-be militant accountant, Kev, and his loose collection of mates. In Gem, they hang about by the storeroom refusing to take part in a corporate cricket match as a gesture of defiance against the “dehumanising” corporate world. In Getaway, set a year later, Kev has given in and is ready to play in the match. He meets the kid from Gotcha!, who’s now got a job as a groundsman at the school. Recognising him from the papers, he becomes excited and blathers on about the example the kid has set to potential dissidents, but the kid just treats him as an idiot, and walks off.