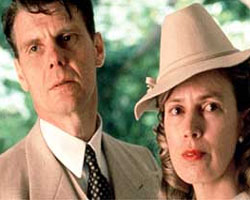 July 1945, shortly after the election, and aristocratic Kentish brewing dynasty the Carlions are gathering for a christening. At their head, Sir Frederic (Leo McKern) is giving his wife cause for concern with his increasingly fragile grasp on the world. Prodigal son Philip (James Fox), a ‘gay bachelor’ who writes for a Punch-like satirical magazine, returns to the fold, and immediately starts stirring things up with threats of salacious stories concerning his mother.

Far more disruptive, however, is his long-missing sister Virginia (Penelope Wilton) who gatecrashes breakfast on election results morning in French resistance coat and beret (it transpires she’s been ‘underground’ in Spain and France during the war) and breaks with family protocol to deliver an impassioned speech about just what the rest of the country thinks of the Carlions and their ilk, and how they now seem intent on dealing with them, as all the while news of the devastating Tory rout are broadcast on the radio.

Philip, though amenable to his sister’s views, eventually caves in to tradition and accepts chairmanship of the brewery (his damaging gossip only used, it turns out, to ensure his position in the family remains secure). With post-war Britain seemingly on the verge of a socialist revolution, he embodies the resilient spirit of Tory future, tying up with the present (Trevor Griffiths wrote the play shortly after the 1979 landslide victory).

Unusually for a Play for Today, and especially so for Griffiths’ work, it’s an extremely cinematic piece – not just a play shot on location on film, but a complex ballet of points of view, tracking shots, chiaroscuro lighting and large-scale production design, managed by Griffiths and director Richard Eyre with astonishing fluidity (Griffiths’ only previous contact with ‘proper’ films had been a gladiatorial turn writing the script for Warren Beatty’s Russian revolution romance Reds).

Set-pieces, including the opening Eton fire drill, the eerie dusk gathering on the terrace, and the confrontation with local hop-pickers who’ve taken over a stable in the spirit of the coming New Socialism (leaving the horses to roam free through the estate and house) are at once immediate and vivid, yet also distinctly distanced – embalmed, even – by the meticulous production. While in so many period dramas this is just taken on trust as part of the genre, here it’s used by Griffiths to put up a barrier between viewer and subject – it is made clear that these people are not, when all’s said and done, ‘just like us’.

The conflict between the family and the hop-pickers is perhaps a tad overdone – the same point is made far more succinctly in the little scene where the poacher-turned-temporary-butler, in a quiet moment, nicks one of Philip’s posh cigarettes and indulgently poses with it and a glass of beer. The playing is superb all-round, too, especially McKern’s masterful embodiment of an Old Tory sinking into confusion, nostalgia and despair. Stiff, formal family conversation (broken up only by Virginia and the eccentric Sir Piers Blair, played, on Griffiths’ instructions, as an ‘upper class Frank Randle’) and ‘I’d like a quick word’ asides are the stifling order of the day, the actors parading, along with the camera, in an endless, assured ballet of cigarette-to-cheek speeches and asides.

The play was scheduled against the second episode of Brideshead Revisited on ITV. Sadly the rosier view of the upper classes won out, and, citing cost reasons (Country broke Play for Today records at £450,000) the BBC scrapped the five subsequent plays in the series Griffiths was to call Tory Stories, covering the fortunes of the same brewing dynasty through other major upheavals in the life of the post-war Conservative party – the Macmillan government’s banking rate leak of 1957 (causing massive inflation and initiating the ‘boom and bust’ economics associated with Conservatism to this day); the Profumo affair; the rise of British Marxism during the 1968 Paris riots; the fall of the Heath government in 1973/4; and the final episode set in a late-’80s future of entrenched Thatcherism. As with Jim Allen’s mega-drama The Commune, cancelled by LWT in 1980 in the wake of their three Dennis Potter plays overspending and underperforming, it’s nothing short of tragic that this fascinating idea was never given the chance to go into production.