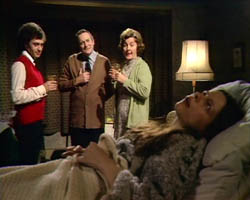 Dennis Potter’s notorious banned tale of a charismatic stranger (Michael Kitchen) who may be, or may just believe himself to be, the Devil, blithely insinuating his way into the unhappy lives of bigoted nostalgic Denholm Elliott and his long-suffering but optimistic wife, who are tied down to caring for their paralysed daughter Pattie, until Kitchen – to put it bluntly – rapes her out of her disability. A brief sequence at the end shows the daughter’s hysterical reaction to catching her dad in flagrante with an old school friend precipitating the car accident that paralysed her.

Decried for all the knee-jerk reasons, but there is something distasteful about Potter self-consciously using the twin taboos of rape and disability (with some relish – the daughter’s incoherent noises were painstakingly scripted) to make some rather dry intellectual comments on prejudice. The daughter’s condition is, admittedly, a neat encapsulation/reversal of Potter’s own psoriatic arthropathy, a crippling physical condition that gave rise to very real fears that he would lose the ability to write for good. Pattie’s mental imprisonment is cause for much morbid contemplation from Elliott, who speaks for the author when he claims being able to hear and comprehend everything, but not communicate back, as his greatest fear.

But for all this possible empathy, a symbol is a symbol, and the “Potter can’t write women” brigade have much to bolster their case here – Pattie is possibly the ultimate Potter victim, and her mother is a rather dimly optimistic stereotype, whose gullibility is mocked openly by Kitchen with copious eye-rolling and mugging to the audience behind her back. Elliott’s character is only slightly more rounded, only rarely breaking out of his role as a typically bigoted (he’s recently joined the NF), hidebound representative of that demon of the middle class left: lower middle-class suburbia.

The crudeness here does give rise to some amusing, Pinter-like conversations, and a sledgehammer attack on Mrs Bates’ bovine, Sunday Best form of Christianity gets a few arch laughs. And the whole thing is, in the end, a sitcom. As well as his unflinching eye contact and sinister/childlike demeanour, Kitchen’s character shows his otherworldliness with brief glances and asides to camera – we’re in vicar/trousers territory in an instant. Likewise, Elliott and wife do much mugging and farcical gesturing in their turn. There’s even the odd moment of queasy comic relief to be had from Pattie’s inarticulate interjections, though her convulsions are more often spotlit to shocking effect.

The trademark Potter epiphany takes place during a drunken celebration of Martin’s acceptance into the household – Mr Bates is goaded into revealing the empty thinking behind his right-wing views, and renounces his NF membership; Mrs B finally stands up to her husband, and of course Pattie is “reawakened” from her symbolic mental limbo – although the final shots imply that now the suppression of Mr B’s affair must be dealt with by the family, without Martin, who escapes to accost another stranger in the street, and begin again.

A very odd play, but not a bad one (the three plays Potter would make independently for ITV in 1980, especially the near self-parodic Rain on the Roof, are probably front-runners for that dubious honour). In reaction to the sentimentality he perceived in Joe’s Ark, DP goes out in the other direction, slotting the highly personal alongside the intellectual, the morbid alongside the farcical, with little or no attempt to stitch the two sides together. This flawed and far from subtle tale was unscreened in its BBC form until 1987, although an inferior film, with Sting in the Kitchen role, was made in ’82.