“We shouldn’t actually be talking to each other…” 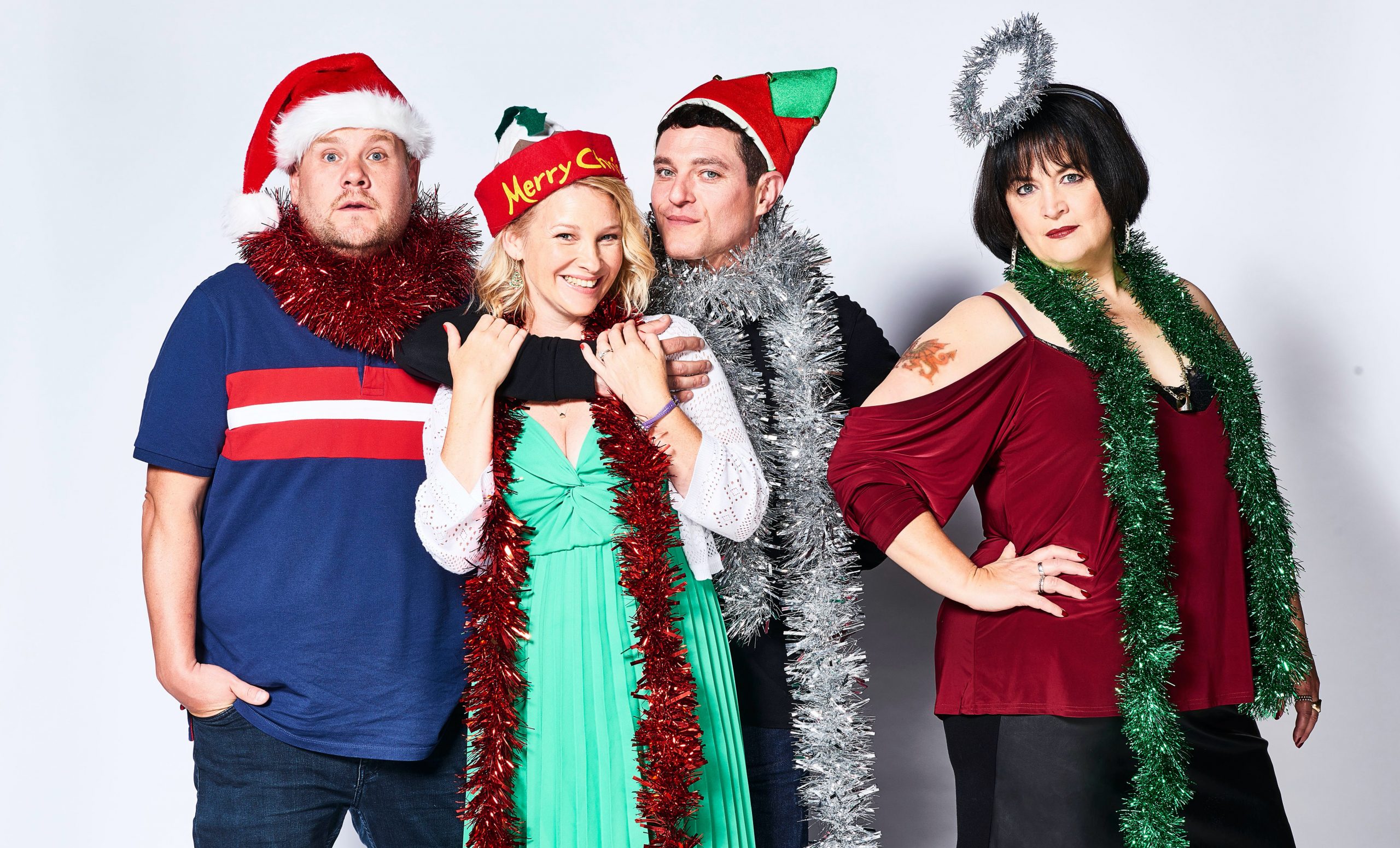 We’ve all got some people we only ever see at Christmas – so it’s no surprise that the reunion has long been a familiar part of the festive schedules.

Bringing back an old favourite to see what happened next could be considered an admission that there are no new ideas, but it’s been a part of Christmas TV for decades – indeed, a Goons revival was one of the main attractions of the holiday programmes way back in 1972. Over the years, reunions ranging from the obvious – like Only Fools and Horses in 2001 – and the baffling – 2007’s To The Manor Born – have almost always brought in a healthy audience for novelty’s sakes if nothing else.

A reunion was the big story at Christmas 2019 as well – the comeback of Gavin & Stacey after almost exactly 10 years since the last episode. This was a major surprise, with James Corden’s stellar career on both sides of the Atlantic seemingly having put paid to any return to Barry and Billericay. But back it was, with all the original cast and crew in place, and 11.6 million people tuned in on the day – by some distance the biggest Christmas Day audience of the decade, even before you factor in repeats and recordings.

This was an extraordinary figure, although Gavin & Stacey was a pretty extraordinary programme – given the original series continues to be among the most popular shows on iPlayer and indeed Netflix (where it regularly appears in their lists of the most-streamed programmes), it’s probably as big as it’s ever been. It’s hard to imagine another series that can bring together audiences of all ages in the same way – although given it ended with a cliffhanger, what chance another visit on the 25th in the next few years?

Understandably, it took pride of place on a solid Christmas Day for BBC1. Okay, so you could argue it was a disappointment that the bumper ratings it pulled in weren’t then passed on to the other shows in the schedule which by and large did the same middling business as in previous years – but with the increased competition for eyeballs on the 25th, it’s clear only the very biggest programmes can now grab the nation in massive numbers.

Christmas Day on BBC1 started in familiar fashion with Breakfast, cartoons including the omnipresent Wallace and Gromit and the service from St Joseph’s Church in Bradford. Then came Top of the Pops getting its earliest ever Christmas Day outing in the distinctly off-peak slot of 11.35am, a long way from its traditional pre-Queen placing but it won its slot quite handsomely and they’ll no doubt get their money’s worth as the performances enjoy numerous airings on future episodes of TOTP2.

After the lunchtime news was the first of two film premieres, the popular Disney picture Moana, followed by the latest in the series of Julia Donaldson adaptations, The Snail and The Whale as usual attracting a spectacular cast of acclaimed actors on narration duty. Then it was time for a word from Her Maj. Clearly the year’s royal ructions led to increased interest in what she had to say, as the six and a half million-strong audience that tuned in on BBC1 made it the day’s second highest audience even before you add on the simulcasts on ITV and Sky 1. More of the same next year, please, Your Majesty.

After a few years away, the animated film made a return to the post-Queen spot, in the shape of Finding Dory – the belated sequel to Finding Nemo which had filled the slot way back in 2007. After that at 4.40pm came a trio of festive specials – the annual Strictly Champion of Champions, Michael McIntyre with silly games and sketches and Call the Midwife, remarkably making its eighth consecutive appearance on Christmas Day. As ever audienceswere down on what they could expect for their regular outings, but kept the channel ticking along in suitably sturdy fashion – and ensured there wasn’t even time for a teatime news bulletin. No Doctor Who again either, with the TARDIS touching down on New Year’s Day once more.

Gavin & Stacey was at 8.30pm, followed an hour later for our usual Christmas visit to Albert Square. Time was this would be the main attraction on the 25th by some distance, but despite inheriting one of the year’s biggest audiences, only 5.5 million made it to the end. However, there was some pride in it being named the day’s top soap. At 10.30pm was another programme a bit past its best, Mrs Brown’s Boys. Now only appearing via specials, what earlier in the decade was the top-rated show on the big day wasn’t even the top-rated comedy, but did reasonable business in a late slot.

Oddest effort of the day followed at 11.15pm, The Two Ronnies Christmas Sketchbook from 2005 getting another outing – but edited down to 20 minutes! Quite why they went to the effort – or why it wouldn’t be easier to make a new one – heaven knows, but if you wanted to see an ill-looking Ronnie B doing jokes about Tony Blair, it was your lucky day. The news followed at 11.35pm to confirm nothing much had happened in the 11 hours since the last bulletin, and then the Christmas Day epilogue, a traditional though little-noticed part of the schedule, got a bit of extra attention as pop superstar and committed Christian Stormzy gave the reading.

How did ITV compete with a swaggering BBC1? Well, given they haven’t ever really bothered in past years, even when BBC1 was less than sure-footed, the answer was pretty predictable – they didn’t. As ever, the aim was to get through the day – and the fortnight – in vaguely festive fashion without wasting any of the big shows which could pull in bigger audiences and revenue earlier in December. Although they were thrashed in the ratings, ITV would doubtless be happier by the fact that over the holidays they didn’t have to move Emmerdale and Corrie once.

ITV’s morning included Jim Carrey’s tepid remake of A Christmas Carol, Countrywise and a Midsomer Murders repeat, while going into the Queen was a Christmas-themed Corrie clip show first shown the previous week. During the 1970s and 1980s, Corrie was only ever on Christmas if it happened to be its regular day, a far cry from now when myriad episodes were broadcast whenever possible. The speech was followed by Shrek The Halls, as seem umpteen times on BBC1 at Christmas but now a bit further along the EPG.

Then came a pretty threadbare line-up which could have really been broadcast any day of the year. A compilation of bloopers from The Chase, first shown the previous evening, took us to teatime, and then after the news at 5pm came celebrity editions of Tipping Point and, yet again, The Chase. Given celebrity variants of these two shows appear pretty much every weekend, this was hardly anything out of the ordinary, though Tipping Point did at least give Rustie Lee some Christmas Day exposure for the first time since TV-am’s heyday. Hour-long episodes of Emmerdale and Coronation Street were at 7pm and 8pm and allowed the channel to be competitive against the Beeb’s big guns, the umpteen other episodes a week meaning it didn’t really matter if these were among the lowest-rated of the year.

At 9pm came… another quiz. But this was slightly more special, a celebrity edition of Who Wants To Be A Millionaire, now in its second year under new host Jeremy Clarkson and making its first appearance on the 25th since 2005. After that came another stack of repeats, rounding off a cost-effective but pretty paltry Christmas Day on ITV.

In previous years, the declining ratings for BBC1’s output led many to suggest audiences were crying out for something new instead of the same old shows. But this seems to be contradicted by the success of Channel 4, whose ratings have increased massively this decade and are now very much the second force behind BBC1 – despite, like BBC1, rolling out pretty much the same schedule every year. Sure enough, Home Alone 2 was there again, alongside another festive Bake-Off and a special edition of First Dates. No chat show for Alan Carr this time, but he was still there, introducing Kylie’s Secret Night, where the pop princess surprised her superfans.

With money not what it was, BBC2 was the most obvious place to see the Corporation’s current mantra of “fewer, bigger, better”, with the day consisting of a stack of repeats – mind you, in the 1970s and 1980s it would have been a blank screen for most of it – with a few big shows in the evening. The repeats consisted of the familiar likes of Dad’s Army and Morecambe and Wise, the latter another outing for the compilation first made for BBC2’s Perfect Christmas Day back in 1991, meaning it was older than all the clips were when they made it. The big attraction was a new documentary about Dolly Parton, followed by another showing for her Glastonbury appearance – and that was followed by Kylie at Glasto, ensuring she was on two channels at once.

Channel 5 offered the usual mix of classic films – Scrooge, Oliver! – and cheap clip shows. Something a bit more interesting came at 9.30pm with The Two Ronnies: The Unseen Sketches, including clips from their Australian shows of the 1980s. This was a bit more interesting than the Ronnies show on BBC1, though “unseen” was perhaps pushing it a bit given they were mostly remakes of their Beeb sketches. Meanwhile, if you really wanted a traditional Christmas, you could find it with BBC4’s production of The Magic Flute from Glyndebourne.

And so another decade of Christmas TV comes to a close. In terms of television as a whole, it’s been a one of seismic change, with digital switchover and streaming services meaning never again will the nation take their pick from just a handful of channels. Yet despite this, it’s perhaps seen the smallest amount of change in the BBC1 Christmas schedules. Yes, some shows and stars have gone, but the mix of animated films, festive specials and the odd sitcom reunion remains pretty much as it was back in 2009.

It’s often been argued that this line-up is getting stale, but it unarguably features the Beeb’s biggest shows which pull in bumper audiences all year round, and nothing else could do anywhere near as well. Perhaps the better argument is that these big programmes are all quite old and nothing much seems to be coming around to take their place. Regardless, the fact the BBC1 Christmas Day schedule continues to receive so much scrutiny illustrates how much it still means