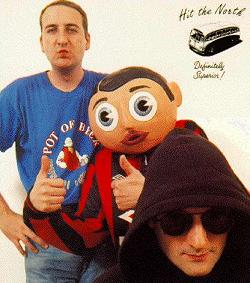 REVERENTIALLY-referenced late-night Fall-honouring Radcliffe-helmed ‘alternative music’ slot, initially concieved as throwaway cash-in on ‘Madchester’ boom with sessions from Intastella, Paris Angels et al, but spiralled off in another direction when local scene correspondent Marc ‘Lard’ Riley apologised on-air for being a ‘hapless charlatan’ having turned up with the headline-grabbing news that he’d seen two members of Wonky Alice in a pub. Double-act establishment (with occasional interjections from Frank Sidebottom) and shared love of low-rent absurdity (which included a ‘Roadshow’ where Bits And Pieces featured tracks by Napalm Death, and the on-air loss of a shoe down the toilet) notched up the listenership just as the first stirrings of Britpop drifted into earshot, paving the way for even more successful Radio 1 transfer. Mark Kermode took over for the last six months, but the writing was on the wall. So much more than just That Show Where Oasis Made Their Radio Debut.