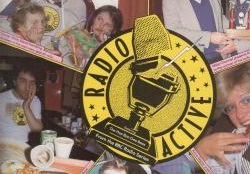 CELEBRATED spoof of local commercial radio’s tendency towards miserly banality, with the funnies provided by Angus Deayton, Geoffrey Perkins, Helen Atkinson-Wood, Michael Fenton Stevens and Phil Pope in the guise of Mike Channel, Mike Flex, Anna Daptor, Martin Brown, Nigel Pry, Oijvind Viinstra, Sir Norman Tonsil, ‘Uncle’ Mike Stand, Dr Philip Persigo, Anna Rabies, Honest Ron and his team of out of work jockeys, The Radio Active Repertory Company (“So what? Do we have to go on?”), The Right Reverend Reverend Wright et al. Fantastic stuff even without the spot-on post-HeeBeeGeeBees weekly pop parodies (even the three or four that weren’t Bob Dylan), and the tendency to get up the noses of stuffier listeners with outrageously vulgar puns and less than reverent attitude to royalty. Later became the nearly as good satellite TV satire KYTV for BBC2.