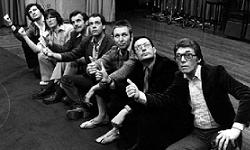 DOUGLAS ADAMS’ superior sci-fi send-up, as overenthusiastic towel-wielding blokes hunting for off-airs of Marvin on Studio B15 are wont to remind you at every given opportunity, started off very much down to earth in late night Radio 4 land. Snowballing cult following, critical reaction and cross-platform in-jokes inserted by Adams into Doctor Who scripts convinced the powers that be that something was happening here, and before long we had the books, the albums, the computer game, the stage show, the TV show, the graphic novels, the script books, Young Zaphod Plays It Safe, and (*spit*) the film, but there are legions of followers who will attest that you just can’t beat the originals. And they’re right too. Rights complications prevented the third, fourth and fifth books from heading radio-wards for many years, but recently Adams’ own preferred producer Dirk Maggs did the honours for well-recieved quirky all-star (Christian Slater, Joanna Lumley, Leslie Phillips et al – and, in a neat in-jokey gambit, TV Ford and TV Trillian David Dixon and Sandra Dickinson) adaptations with a ‘proper’ ending to boot (we’ll have none of that Eoin Colfer pointlessness around here, thanks). If you only know it from Martin Freeman sulking “now I’ll NEVER get that toy”, do yourself a favour and search out the original ‘phases’. Steer clear of Marvin’s singles, though.

Related Items:"That's nothing - anyone could have a Thing Their Aunt Gave Them Where They Don't Know What It Is", Dirk Gently's pretty damn good too, Douglas Adams, Geoffrey McGivern, Geoffrey Perkins, Journey Of The Sorcerer, Mark Wing-Davey, Marvin on Studio B15, Peter Jones, Reasons To Be Miserable (His Name Is Marvin), Richard Vernon, Simon Jones, Stephen Moore, Susan Sheridan, that bloody awful cash-in single by Liquid Gold or The Dooleys or whoever it was, The Great Green Arkleseizure, twelve Ningis to one Pu
Share
Tweet
Share
Share
Email