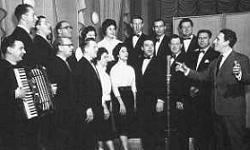 SCARY, scary Sunday afternoon staple, usually broadcast just prior to Radio 1 taking over the FM transmitters for the Top Forty. Featuring the vocal talents of The Cliff Adams Singers and The Jack Emblow Quartet, the close-harmony renditions of Camptown Races or Banjo On My Knee, which crucially, just seemed to loom terrifyingly out of nowhere with no introduction, was and still is the stuff of nightmares. Ahem.

Related Items:"Dowwwwwwwn by the Old Mill streeeeeeam", Camptown Races, Guantanabastardmera, impatient youngsters waiting to hear where If I Was Your Girlfriend by Prince was that week, like The Black And White Minstrel Show but more nauseating (yes that's possible), making every single song sound identical, spurious retro-irony compilations positing ridiculous link to 'Swinging Sixties', The Cliff Adams Singers, The Jack Emblow Quartet, their creepy wailing in that Doctor Who story was good though
Share
Tweet
Share
Share
Email
9 Comments