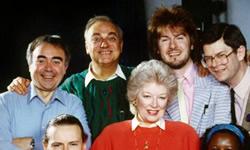 BY the mid seventies Radio 2 was already turning into a rest home for dwindling nightclub acts and those intriguingly billed ‘all-round entertainers’, all of who undoubtedly benefited from further welcome employment on air late into the eighties. Stalwarts included Bernie Clifton’s Comedy Shop, whose contributors included Pat Mooney (and who won a spin off show, Mooney’s Monday Magazine). If you couldn’t sell your topical one-liner to Radio 4’s Weekending, The News Huddlines team were always available. Hinge And Brackett cornered the market in sound-only drag acts; Rolf Harris went on a Walkabout that lasted a whole decade; Dealing With Daniels puzzlingly contrived to enact a card-based game show on the radio; while Jeremy Beadle’s Nightcap helpfully reminded listeners when it was time to switch off their set. Les Dawson, Roy Castle and many others turned their hand to revue-style series, including Ken Dodd who stuffed more money under the mattress thanks to his Palace Of Laughter. Meanwhile both Instant Sunshine and their C-list cousins Harvey And The Wallbangers ‘took’ those ‘sideways’ looks at the events of the week in song. More substantial fare came courtesy of The Grumbleweeds, so accidentally iconic that they get their own proper entry, and ISIHAC-riffing Cryer’n’Brooke-Taylor smut-pun-fest Hello, Cheeky!. Nowadays more likely to play host to someone causing a national scandal by calling Peter Egan a ‘Joint Account jerk’.