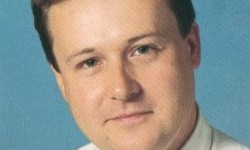 CYNIC PAR EXCELLENCE of the R2 nightshift for the best part of 20 years of whom the dreaded TOGs offered approving words during long period as Wogan’s default stand-in in the late 90s, though daytime depping (and promotion potential) later became scarce thanks to BBC liking for untrained ‘celeb’ presenters and his own hapless battles of wit with the Popmaster format. Arrived from mid-80s BBC Essex to become a night-time announcer and newsreader and progressed, often by accident, to world-weary dead-of-night raconteur on self-dubbed ‘The Best Time Of The Day’, a thriving show that relies almost entirely on creative listenership and impossibly dry tone. Voice frequently provokes the assumption that he is a) smug; and b) 20 years older than his real age (born in 1956, ackcherloi) but is a notable survivor; deliberately refuses to mention Sarah Kennedy being on after him (they fell out when he read her news and travel in the ’90s and she turned up tired and emotional once too often) and endorses ‘truck writing season’, the fingerscribing of in-jokes and acronyms like ‘SLAP MY TOP’, ‘SCOF’ and ‘BAG’ into the dirt on the nation’s haulage vehicles, to the bafflement of those who dare to sleep at night. Lived on canal boat christened ‘The Blue Pig’ when the night-time schedule came from Birmingham. Not popular with Russell Brand fans.