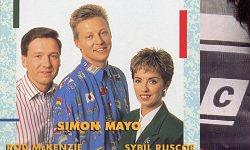 RELATIVE longevity-boasting adopter of Tarrantesque zoo format for nationwide breakfast consumption, enabling various attempts at knock-on TV stardom, especially for the patented Confessions™ concept. Also kicked around On This Day In History, a round-up of famous events in the past set to George Michael’s I Want Your Sex, awkwardly-titled Identik-Hit Quiz, knockabout pseudoshagging sixth-form sexual chemistry with the likes of Sybil Ruscoe, Jakki Brambles and Dianne Oxberry, news bulletins from stolid Rod McKenzie and wacky japes aplenty from Ric Blaxill. ‘Spawned’ several novelty hits – Donald Where’s Your Troosers, Kinky Boots and Always Look On The Bright Side Of Life. Married to a producer of religious programmes. Not an atheist.