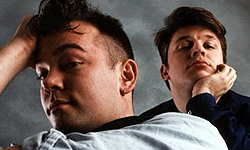 COMEDY DOUBLE-ACT first deployed in epochal razor sharp culturally-topical (i.e. jokes about Jamiroquai and Supermarket Sweep) sketch show Fist Of Fun, who were then added to the ‘Comedians-as-DJs’ roster and did better than most, due partly to Lee’s mockably eclectic fanaticism for music, and partly to their actually being any good to begin with. Lots of witty commentary over scratchy American angst-rock and hitting of Peter Baynham involved, as well as sketchy interludes with the likes of The Fake Rod Hull and ‘Hobby King’ Simon Quinlank, most of them played by Kevin Eldon. Generated huge cult following, and responded to this by getting the ‘Child Army’ to conduct huge scale situationist pranks, such as pestering ageing local radio DJ Christopher South for autographs. Phased out at the height of their TV popularity, so the rumours have it, because ‘proper’ DJs were unhappy at these interlopers getting higher ratings.