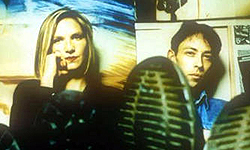 UNLIKELY combination of trend-cyncial music journo Steve Lamacq and woman who booked the bands for The Word Jo Whiley beat off stiff competition – including Mark Radcliffe and Richard Easter – to become the Goodier-replacing new hosts of The Evening Session, luckily for them arriving just in time to surf Britpop-instigated waves of listener interest. Yet where Goodier could be described as ‘square’ even by the bands he featured sessions by, Lamacq & Whiley were too laid-back and too ‘cool’ respectively to get as audibly excited about the music as he did, being more interested in live dates and ‘multiple formats’ and what have you. As a result, stuck around after Session-ousting on predictable ‘serious presenter’ ticket, Lamacq doing mainly documentary stuff and Whiley presenting over lunchtime muso-fest The Live Lounge.