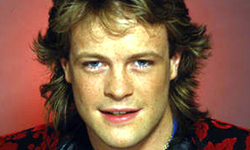 ONCE THE BRIGHTEST STAR in the Radio 1 firmament, a self-styled ‘Compact Disc Jockey’ who arrived at Radio One to take over the teatime slot from Peter Powell, armed with a list of hilarious Twisted Lyrics (ie humour-free misheard songwords that had already been done by every bloody DJ under the sun anyway). Later fronted the TOP FORTY, and countless ‘Social Awareness’ campaigns, before being teamed for no good reason with Liz Kershaw on the Weekend Breakfast show (cue endless ‘comedy’ charity fund-raising duets), before Matthew Bannister fired him over the phone in front of a conference of beery students in 1995. Always the kind of DJ to be pictured pointing at a record in his Radio 1 promotional photo.

Related Items:'Bannisterised' in front of Radio Cream's disbelieving eyes, "that's no good - he'd end up as Brunoo", Bruno Brookes, pretending not to be in on Chris Morris pranks he was actually in on, something about banana sandwiches
Share
Tweet
Share
Share
Email