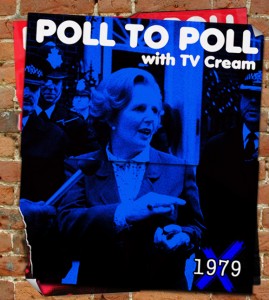 Change is afoot, both in the corridors of power and Television Centre. Familiar faces are taking their leave and new faces are settling in for the next decade. And is that Richard Stilgoe’s piano being wheeled into the BBC election studio?

Alongside a look at how the Beeb covered the result on air, this podcast also:

– prays for a moment of hush amidst the hurly-burly of 1979’s party political broadcasts;

– considers what Not The Nine O’clock News news was almost not;

– hears from Dr David Butler who shares his memories of the 1979 election;

–  continues to compile an inventory of TV Election Essentials, this week concentrating on whimsy;

– and extends a welcome to planet girth for Cyril Smith.

You can download it from TV Cream (a Cyril-sized 77MB); you can subscribe to it via iTunes; or you can listen to it right here: