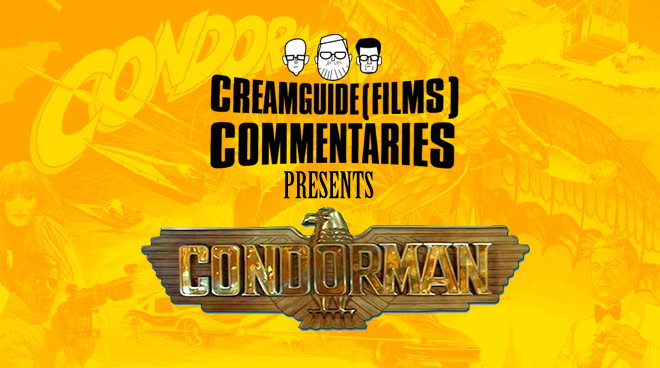 Creamguide(Films) is back! Back! BACK! for 2016 with a request from Robert Gillespie’s puppet lion – Disney’s live-action frippery from 1981: CONDORMAN. That can only mean swearing, poor impressions, endless menchies for Little and Large and musical interludes. Listen to Jack attempting colloquialisms as Chris blatantly contradicts Craig out of sheer badness: yes, it’s business as usual round the Creamguide(Films) Fireplace. Turn on the commentary as the movie ident kicks in and enjoy(!)

To listen, click above, if you can. Or download it here (it’s 85.5 MB to you). If you haven’t already, you could also subscribe. And this is our RSS feed.

SPOILERS: the additional SFX are provided by Chris blowing his nose

1. James Hampton. And he wasn’t (that was Fred Sorensen.) But he was in Tales of the Golden Monkey, which is the same thing
2. Robert Arden
3. The Cumbersome Diamond is a Sid Caeser reference. Just sayin
4. The Jokers from 1967, not in The Assassination Bureau. But Vernon Dobtcheff is (see below.) And Fred Emney, kids!
5. About £1,500
6. From 1968
7. From 1996. Bishop Wisharton
8. Checked in to the motel in 1985. The Bruce is her last screen credit, it says here
9. John ‘Baltar’ Colicos was Cromwell in that. Pleasance was Cromwell in the very literally-titled Henry VIII and his Six Wives starring Keith ‘not long dead’ Michell
10. Vernon Dobtcheff. Most recently he was in Jonathan Strange & Mr Norell
11. Leslie Dwyer
12. “Who Killed Mr Partridge?” 12th January 1986. He’d quit to go off and run a pub but wanted to put the shits up the rest of them
13. The Return of Captain Invincible from 1983
14. Bonnie and April
15. There wasn’t
16. 1979. Telt ye
17. Baby BA-BY!
18. And it has a John Barry score
19. Billed as ‘Paramount Pictures Corporation and Walt Disney Productions Present’
20. Kids from 1995. Still can’t remember the branding
21. When they bought Marvel they were urged to include CONDORMAN in the ‘universe.’ They didn’t
22. Moloch
23. David Hedison (boo) vs Norman Burton (yay)
24. Robert Arden. And it’s Omen III

Creamguide(Films) will return with SUPERMAN IV