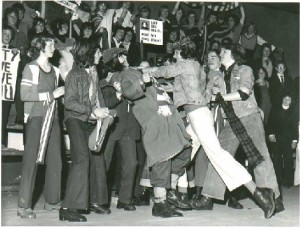 The school play. Fraught auditions, fumbled lines, dad’s old trousers nicked for costumes, and of course the Good Name of the School at stake so don’t cock it all up. (“No headmaster.”) The variety of dramatic works deemed suitable for pubescent thespians was, however, limited: Oliver!, for one, loomed large. But the best school play was Zigger Zagger, Peter Terson’s sixties tale of football fandom run wild. The subject matter was sufficiently un-poncy to keep kids interested through long after-school rehearsals, and the parts were tailor made for the typical class demographic. The schoolroom alpha male was a shoo-in for the titular shouty footie hooligan, the one boy with some semblance of acting ability played the complicated lead role, the class clown could easily steal the show with minimal effort as the trendy vicar, and all the kids too meek or hopeless to land a proper role stood on the terrace at the back of the stage, occasionally doing the odd crowd chant and waving scarves brought thriftily from home. Downsides were the lack of decent female parts (up to progressive English teacher in charge of production to engineer suitable gender cast swaps without confusion of embarrassment) and the constant worry that the ‘terrace’, ably constructed from school benches lashed together with gym ropes though it may be, was in danger of first night collapse in front of the headmaster’s wife. Other than that, it had everything: comedy, singing, pathos, some choreographed aggro, a ‘message’ about getting a decent job instead of pratting about on the dole, and lashings of ensemble shouting.